Gambling spend down since 2008 on average

Last week the National Audit Office published a report scrutinising the operation of the Gambling Commission, the UK’s gambling regulator.

The BBC reported one of the figures in the report, that “licensed gambling has grown by 57% over the last decade”.

But this figure needs some important context to understand it. It doesn’t necessarily mean that the amount of gambling has grown by that amount.

Firstly, it’s worth noting that the NAO figures show that the yield from licensed gambling (which is the revenue generated minus the winnings paid out) grew by 40% in the decade to 2018/19. The figure reported by the BBC, of 57% growth over that period, is the figure after excluding the National Lottery, as the NAO report makes clear.

More importantly, this shouldn’t be taken to mean that people are gambling more, because much of this growth comes from changes to the regulation of online gambling in 2014.

Before November 2014, online gambling based outside of Great Britain did not need to be licensed and regulated and so revenue from that did not show up in the Gambling Commission’s figures before then.

In 2013/14, the last full year before the regulation change, the gross gambling yield from online gambling was £1.2 billion, and had been between £700 million and £1 billion for a few years. (These figures are adjusted for inflation, so they reflect the change in the value of money over time.)

Then in 2014/15 (the year the regulations changed), the yield from online gambling doubled to £2.4 billion.

Online gambling yield has continued to increase since then, but at a slower rate, to £5.3 billion in 2018/19.

If you look at the change in the gambling yield excluding online gambling, it’s actually fallen by 2%  over the last decade, from £9.3 billion to £9 billion.

So the boom observed in the past decade may have been created largely by the change in regulations, not by a real change in people’s behaviour. We don’t know how much it would have grown if online gambling had been classified consistently across that time.

This is further supported by the evidence on gambling behaviour.

The Gambling Commission runs an annual survey which suggests that the amount of gambling taking place isn’t increasing much.

In 2015, 45% of respondents said they had gambled in the four weeks prior to being surveyed. In 2019 the figure was 47%. Also the frequency of gambling appears to be decreasing over time. Fewer people reported gambling at least once a week, while the proportion saying they gamble more than once a month, but less the once a week, has increased.

The Gambling Commission doesn’t ask people how much they spend on average, but data from the Office for National Statistics also suggests  this hasn’t changed much either in recent years and has fallen over the longer term.

Over roughly the same period that licensed gambling yield increased by 40% , the average household spend on gambling fell 33%. Both figures are adjusted for inflation. 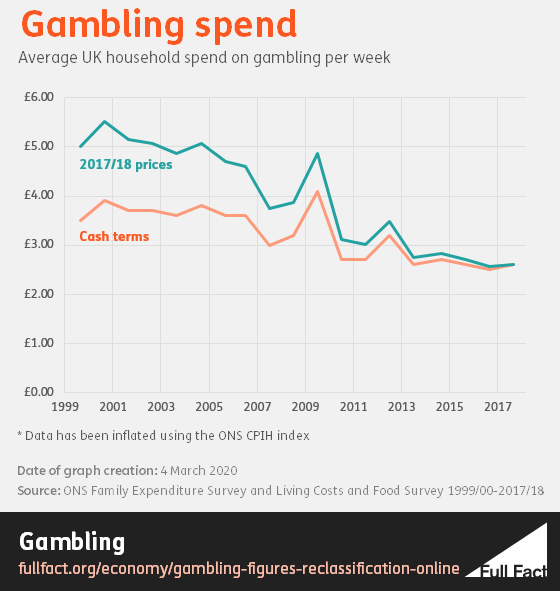 We got in touch to request corrections regarding claims made on the BBC and on ITV.

The BBC made a correction.

ITV did not respond.