Gender pay gap: what do the new figures tell us?

New rules mean all UK employers with 250+ employees have to report their gender pay gap. 10,000 employers responded, and 78% pay men more than women on average, based on median hourly earnings.

New rules means that all UK employers with over 250 staff have to report their gender pay gap to the government. Over 10,000 employers had responded at the time of writing, of which around 5% either had under 250 employees, or didn’t provide the total number.

78% of these employers had a gender pay gap in March or April 2017. That’s around eight in ten.

Among these firms, the median hourly wage for women is 10% less than for men. That compares to around 18% across all UK workers. These figures refer to full and part-time workers.

What is the gender pay gap?

It’s the difference between men’s and women’s average earnings, and is often expressed as a percentage of male earnings.

That’s not the same as unequal pay—when men and women get paid different amounts for doing the same work. That’s been unlawful since 1970.

What do the new figures tell us?

14% of employers with more than 250 employees reported no gender pay gap, and 8% have a negative gap (meaning women have a higher median hourly salary than men).

Men had higher median bonuses at 53% of organisations, with women having the higher average at 15%. Across all employers of 250 people or more, the median bonus for a woman was 6% lower than for a man.

The data also allows you to look at the specific situation at each of the 10,000 organisations in more detail. You can search for any organisation covered by the data here.

On average, the bigger the employer-size, the higher the gender pay gap. 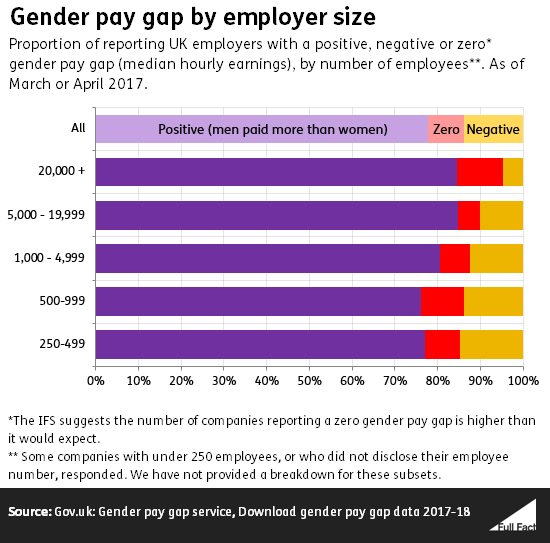 The Institute for Fiscal Studies says that “over time the data will allow the monitoring of trends in gender pay gaps in different industries”.

But it adds that the figures must be interpreted with care. It suggests that there may be different reasons for pay gaps in different organisations and at different points in employees’ careers.

For example, it says “research also shows that some, but not all, of the gender wage gap is explained by the fact that after having children women are much more likely than men to work part-time, and part-time work is associated with little or no subsequent progression in hourly wages.”

It also suggests there may be some errors in the figures organisations have submitted. For example, the number of employers reporting their pay gap to be exactly zero (in mean and median terms) is larger than would be expected.

Who’s missing from the data?

All employers with over 250 employees have to report their gender pay gap. This is based on a “snapshot date” in March or April 2017.

Both full and part-time workers are included, and each is counted as one individual employee.

Agency workers are counted as the employees of their agency or service company. Self-employed people are counted in an organisation’s data if they “personally perform” work for them.

Employees based overseas are generally included if their contract is subject to English, Scottish, or Welsh law.