Economy introductions: the size of the government deficit

The government runs a 'deficit' if it spends more than it gets. It borrows money to make up the difference. This has happened in all but 13 years since the Second World War.

"Reducing the deficit" is not the same as "paying down the debt". The deficit measures how much the government is borrowing each year (in net terms). The national debt is the total sum of money it owes to other institutions.

How big is the deficit now? 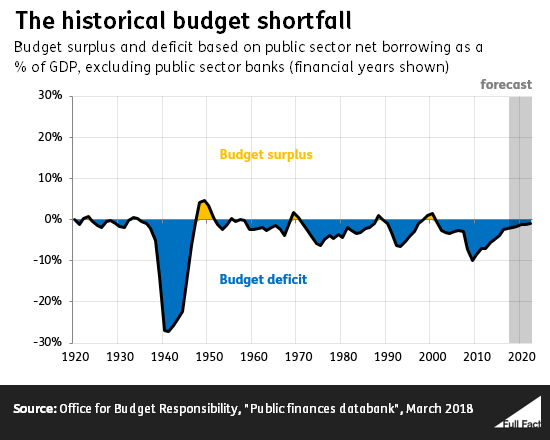 There are several ways of looking at the deficit. The two most common are the current budget deficit and public sector net borrowing.

The current budget deficit is the difference between what the government spends on things like wages and welfare payments, and what it gets in current income (mostly tax revenue).

Public sector net borrowing is the current budget deficit, plus net investment: the difference between what government spends on assets like roads and buildings, and what it gets from selling these assets.

Both of these are usually measured without including public sector banks. 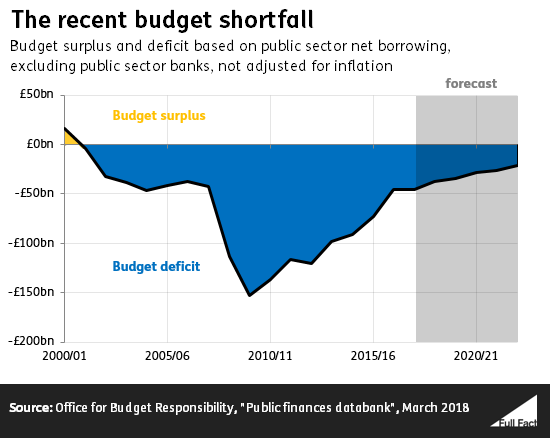 Deficit figures are often ‘cyclically-adjusted’ because the deficit changes with the business cycle.

In a recession, unemployment tends to increase, tax revenues fall, and spending on unemployment benefits rises. And in an upturn, employment rises, reversing this effect.

Cyclical adjustment means that we take out these effects, and estimate how large the deficit would be if the economy was 'in the middle' of the business cycle—so in neither a boom nor a bust. 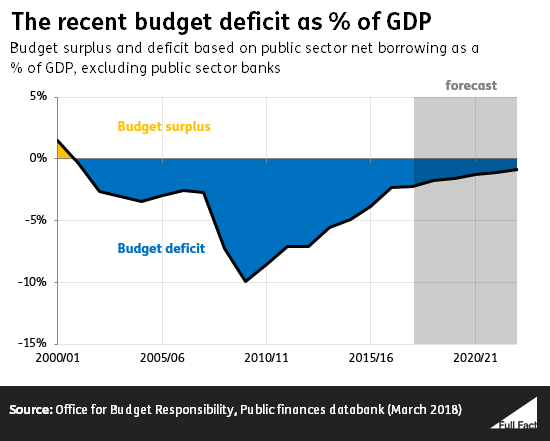 Estimating the size of the cyclical deficit is difficult, and there's often disagreement over the exact figure used. Even once a number has been settled on, it can be revised in the future when more information is available.

In 2008 the Treasury thought that the cyclically-adjusted deficit for 2007/08 was about 2.7% of national income. The most recent figures from the Office for Budget Responsibility show that it was closer to 4%.