By changing short-term interest rates, the Bank of England can alter the cost of borrowing money in the rest of the economy. Its aim is to “influence the overall level of activity in the economy”, and ultimately inflation.

In November 2017, the Bank of England set the official Bank Rate at 0.5% annually—the first increase since July 2007.

Even though Bank Rate has increased, it remains at a low level compared to the past. 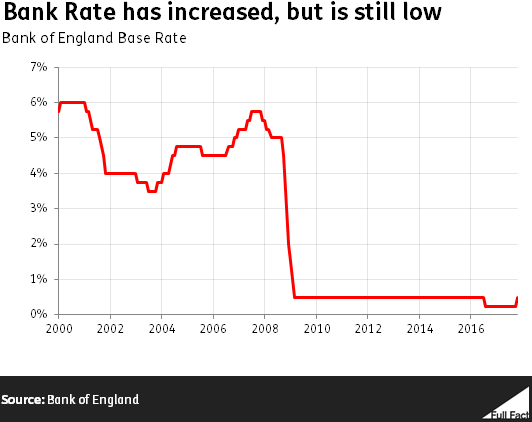 When the Bank of England’s interest rate increases, it’s more expensive for banks to fund themselves.

Higher interest rates in the UK might give some investors an incentive to save money here, rather than in countries that have lower interest rates. This puts upward pressure on the value of the pound soon after the increase is announced, although the precise long-term effect is uncertain.

Other investors switch from holding on to government bonds or shares in companies,  reducing their price.

According to the theory, when interest rates are higher less money will be spent. When less money is being spent, prices for consumer goods rise more slowly.

If prices rise too slowly then inflation will fall below the Bank of England’s inflation target, set by the Treasury. The current target is for prices to rise by 2% per year.

Usually at that point, the Bank of England would cut interest rates again, making it less expensive for other banks to borrow and lend money and, as a consequence, pushing down interest rates for businesses and households.

Saving would become less attractive because interest rates on savings accounts would fall, while borrowing and spending would become easier—so the economy would start growing more quickly.

Sometimes the Bank prioritises keeping a suitable level of employment and economic output over hitting its inflation target exactly, as it did in August 2016.

Changes in this interest rate should, in theory, influence other interest rates, the growth rate of the economy, and the rate of price inflation. But monetary policy takes time. Although some of its effects take hold very quickly—like the effect on people’s expectations—the full effect on inflation takes up to two years to work through.

Interest rates have been low since 2009

The Bank has also used new ‘unconventional monetary policies’ like quantitative easing to try and encourage economic growth and push inflation towards its target level.

Introductions to the economy