"There has been a sixty per cent rise in working people claiming housing benefit under this out-of-touch Tory-led Government." Emma Reynolds, 25 June 2014

Labour's Shadow Housing Minister Emma Reynolds led a debate in the House of Commons yesterday on the cost of housing, claiming that many were being "priced out" of the market.

To illustrate the point, Ms Reynolds claimed in a press release earlier in the day that there had been a 60% rise in the number of working people relying on help from Housing Benefit to pay their rent.

Government figures back her up, showing that since the election the number of claimants known to be in work has risen by 61%. However this number was also rising before the election, and the data is limited because the employment status of most of those in receipt of the benefit isn't recorded.

The Department for Work and Pensions (DWP) figures show that there were around five million Housing Benefit claimants in the most recent month for which data is available: February 2014. Of these, just over a million were recorded as being employed.

However for most Housing Benefit claimants (3.2 million of them) there isn't any data on their employment status. This is because they are 'passported', meaning that they receive another benefit which automatically entitles them to receive Housing Benefit.

At the moment, if a person receives Income Support, Income-Based Jobseekers Allowance (JSA), Income-Based Employment and Support Allowance (ESA) or Guaranteed Pension Credit they are automatically entitled to Housing Benefit. Many of these benefits are available to people who are in some form of employment.

The number of people receiving 'passported' Housing Benefit has fallen in recent years, and some of those coming off this form of the benefit may have gone on to contribute to the rise in the number of claimants recorded as being employed.

It's also contentious to attribute the rise solely to the "Tory-led Government", as Ms Reynolds does. The published DWP figures stretch back to 2008, and show that the average monthly rise before the election was actually sharper than it has been since May 2010. 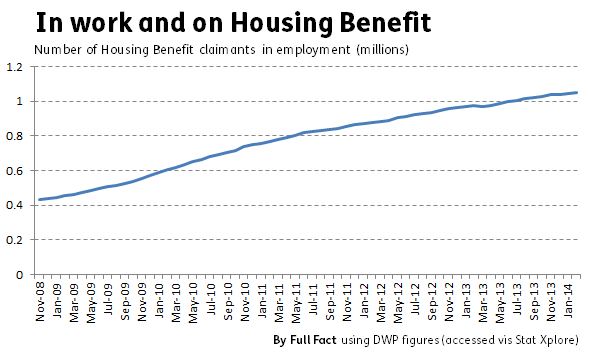