Home ownership is on the rise.

Correct over the last year in England. The proportion of homes owned by the occupier increased by 0.5 percentage points between 2016 and 2017. This follows year on year falls since 2004.

“Home ownership is on the rise.”

Over the same time period the proportion of privately rented homes has risen from 12% to 20%.

Housing is a devolved area, and figures for 2017 aren’t available for Scotland and Northern Ireland. In Wales, there was no change in the proportion of homes that were owner-occupied between the last two years. 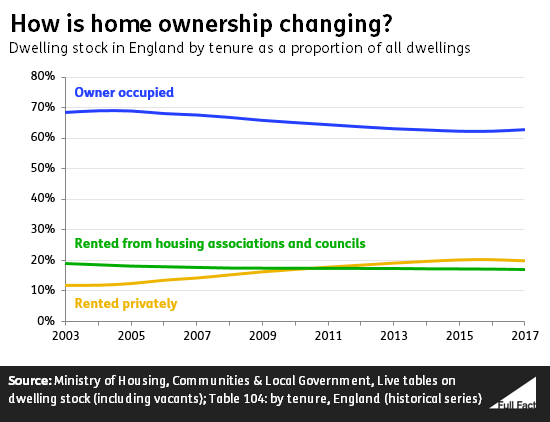 The data measures the number of homes owned by occupiers

For example, if the number of second homes owned was increasing, more homes would be owned by the occupier. But the number of households owning their own home would be the same.

More households own their home according to other data

However there are other data sources available that measure the proportion of households owning their own home, such as the English Housing Survey and the Labour Force Survey. The latter also covers the whole of the UK.

Figures from the Labour Force Survey give a very similar picture, estimating that in the last quarter of 2017, 65% of UK households owned the property they lived in, up from 64% a year earlier. It shows a rise in ownership in each of the UK nations.

The English Housing Survey doesn’t have quite as recent figures, and so doesn’t report a rise in home ownership in England in 2016/17 compared to the year before. It found that the proportion of households owning their own home has been flat since 2012/13. Around 14 million households (or 63%) were owner occupiers in 2016/17.

What about shared ownership?

MHCLG told us that shared ownership schemes are included in the dwelling stock figures for owner-occupied households. This is where the occupier owns a portion of their home (e.g. 25%) and pays rent for the portion they don’t own.

However the Labour Force Survey counts these households separately and estimated almost no change in the proportion of households in England in shared-ownership homes from 2016 to 2017. There was no change at a UK-wide level.

We corrected the conclusion of this piece to clarify that home ownership increased by 0.5 percentage points rather than by 0.5%.