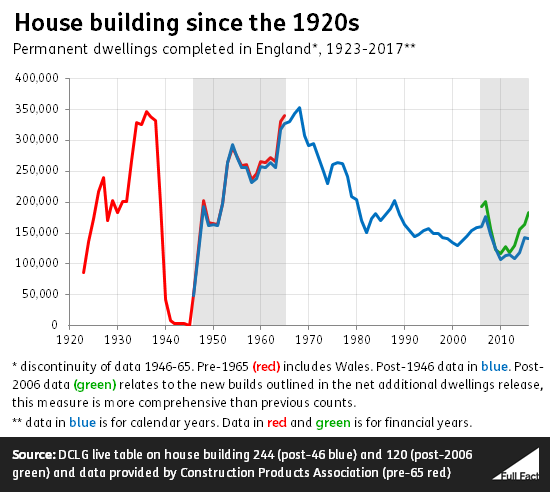 There are two different sets of housebuilding figures

The more historical figures are known to have undercounted the number of homes that have been built. Since 2006, there are more accurate figures available, and these are the ones we’re quoting when we say 184,000 homes were built in 2016/17. The older measure shows only 148,000 homes completed in England in 2016/17.

How else can we crunch the numbers?

Sometimes people use figures for across the United Kingdom instead of just England. 178,000 homes were completed in 2016/17, and 197,000 started, although again these use the incomplete figures.

We can also look at how many homes are added to the overall stock each year, rather than just focusing on how many were built.

Using our most complete set of figures there were 217,000 more homes in England in 2016/17 than the year before, including the 184,000 that were built from scratch. This figure also takes into account homes that are converted or are changed to residential use, having previously been something else like an office or agricultural building. It also takes into consideration the number of homes that are demolished over the year.

The various ways of mixing and matching the figures and their geographical coverage can make it tricky to compare the records of different governments.

There’s also the matter of when exactly you pick your starting point. Recent elections and changes of government have taken place in May of a given year, so claims about a particular government’s record might measure from the start of that calendar year, the start of that financial year, or the start of the following year.

Similarly, houses completed early in the life of one government will have been started under the previous one, and it can take time before a new housing policy is introduced and has an impact on building. 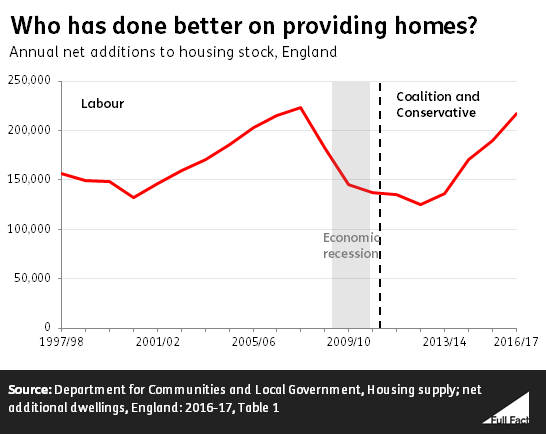 How many homes do we need?

No recent government has seen enough homes built to keep up with demand.

There are various ways of measuring the ‘housing gap’ between how many we need and how many we’re building. One way is comparing projections for the number of new households with current house building.

England is projected to have 210,000 extra households per year between 2014 and 2039. A household is a person living alone or a group of people living together (such as a family), and two or more households can share one house. We don’t necessarily need one house per new household.

In 2014 Dr Alan Holmans, a housing expert at the University of Cambridge, produced new estimates of the housing gap. They were based on 2011 data but took housing conversions, second homes and vacancies into account.

We changed the title of the graph to reflect the fact it doesn't just include house building. Previously it was titled 'Who has done better on building homes?'

We removed a typo and where we had described how many 'houses' were added to the overall stock each year changed this to refer to 'homes'.