House building starts fell by 45% under Labour, but have increased by over two thirds since the Conservatives were in government.

This is correct, but also reflects the impact of the financial crisis on house building. The exact time period you look at and the measure of building can have a big impact on how the figures are interpreted.

“House building starts fell by 45% under Labour, in 12 years, they have increased by over two thirds since the Conservatives were in government. ”

This is a claim that we’ve seen before. The figures are correct, although they reflect the impact of the financial crisis—and there are other ways to measure house building.

Comparing that with the houses started in 2015 (146,000) shows that housing starts have increased by 71%—which is actually a bit closer to three quarters than two thirds. Older house building estimates from when the government first made this claim supported a claim of two thirds only.

The crash in house building around the time of the change of government affects this picture hugely. For example, if you switch from looking at housing starts to looking at completions, house building under Labour fell by 16% whereas under the Coalition and Conservative governments it increased by 14%.

This is because of the lag time between beginning to build a house and finishing it. The full impact of the sharp decline in housing starts under Labour didn’t feed through into completions until the Conservatives were in power. 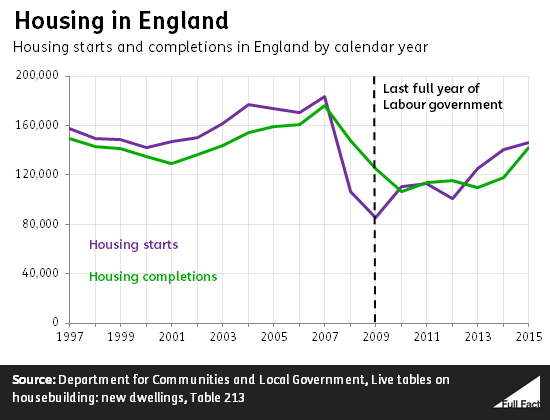 We’ve written more about how house building statistics can change depending on how you count it.