How accurate have Brexit forecasts been since the referendum?

Following the vote to leave the EU in June 2016, economists set about forecasting what Brexit meant for the future of the British economy.

But how accurate did those forecasts end up being?

This can’t tell us whether current forecasts for the future are likely to be correct or not. But we can look at whether forecasts for economic growth until 2018 came to pass.

Forecasts accurate over the medium term, less so the short term

In October this year the Institute for Fiscal Studies (IFS) looked at a variety of economic analyses produced both before the referendum (under the assumption we would stay in the EU), and post-referendum when it became clear we were leaving.

In fact the economy grew by 4.9%, meaning overall economists were fairly accurate when they revised down economic growth following the referendum—though they were slightly pessimistic about the fall.

However what the forecasts were less accurate at predicting was GDP growth in each year. The forecasts analysed by the IFS all predicted that GDP growth would fall sharply in 2017 and then rebound in 2018.

The IFS said: “Instead of a short-term hit and quick rebound, Brexit slowed growth more gradually.”

So forecasts shortly after the referendum were fairly accurate over the medium term, but not from year to year. 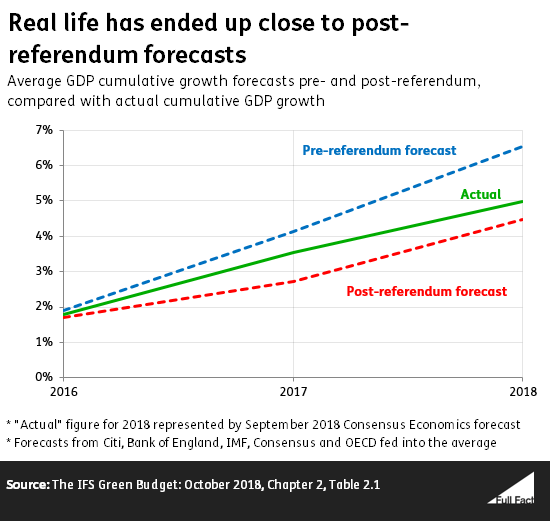 The OBR were slightly too optimistic

On the flipside, the Office for Budget Responsibility (OBR), which provides independent forecasts to the Treasury, weren’t pessimistic enough about the effect the referendum on GDP growth.

In its last economic forecast before the referendum in March 2018, the OBR forecasted GDP to grow by roughly 6.4% between 2015 and 2018. Post-referendum the OBR revised this down to roughly 5.3%—slightly higher than the actual GDP growth of 4.9%.

Economic forecasts often get a lot of criticism for being inaccurate. We’ve written before about the OBR’s consistently over-optimistic forecasts and also how employment rose post-referendum in contrast with the Treasury’s forecast employment would fall.

But it does seem that once it became clear we were leaving the EU, economists forecasted the impact of the referendum vote on GDP fairly accurately over the space of two years―although the difference in how quickly economic growth slowed down is still important.