How many retail jobs have been lost this year?

50,000 retail jobs were axed in the first half of this year.

This refers to businesses in all sectors who publicly announced job losses. Over the long term the number of UK retail jobs appear stable, but jobs in other sectors are growing.

“A staggering 50,000 retail jobs were axed in the first half of this year.” 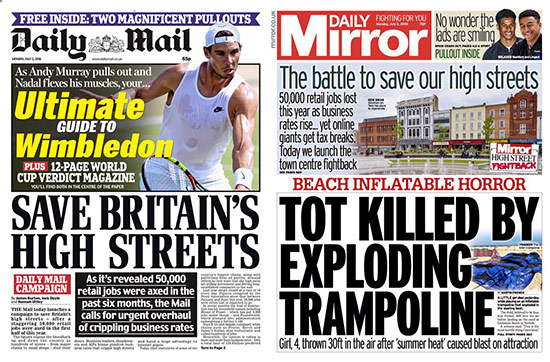 The claim of 50,000 retail jobs being lost in the first six months of 2018 comes from figures collected by the Press Association (PA) – they said they added up the total number of job losses publicly announced this calendar year.

The data includes businesses in all sectors – not just retail, and doesn’t include those businesses that don’t publicly announce job losses.

Data from the Office for National Statistics (ONS) shows that retail jobs are seasonal, falling every spring and rising every winter, and that the drop in the first three months of this year was actually below average.

Over the long term retail jobs are stable, though jobs in the rest of the economy as a whole are growing.

PA said they looked at companies that cut or announced cuts to jobs in the first half of 2018, and found that 50,000 jobs were axed.

These figures were for companies across all sectors, not just retail companies; they included retail firms like Toys R Us, but also firms in other sectors like Prezzo and Carillion.

Finally the estimate doesn’t factor in any jobs that were gained over the same period, whether in retail or elsewhere.

To get an accurate and comprehensive picture of retail jobs numbers we can use data from the Office for National Statistics on workforce jobs.

Retail jobs are always cut at the beginning of the year

ONS data for the UK estimates that from the last three months of 2017 to the first three months of 2018, 84,000 fewer people were employed in retail. This data covers employees and self-employed people (99% of the total workforce), and the retail sector excludes people working in car or motorcycle garages.

But it does provide more accurate and useful data for understanding the health of the retail jobs market.

One important thing the figures show is that retail jobs are seasonal and so looking at changes from quarter to quarter isn’t that helpful in terms of understanding the overall trend. The data also show that the estimates for retail job losses this year are similar to previous years.

The data shows that since records began in 1997, there has always been fewer people employed in retail in the middle of the year compared to the end of the previous year. The drop of 84,000 is below average. 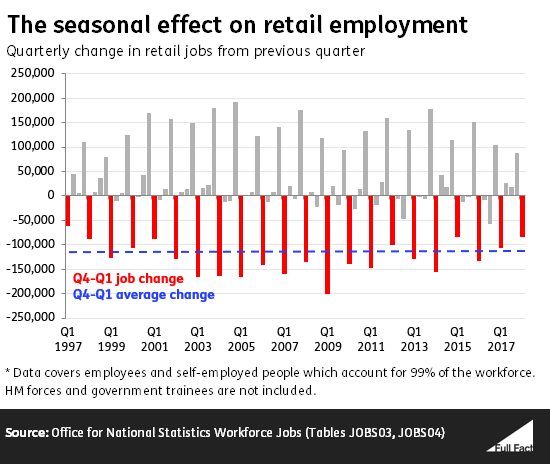 There has also been a fall from Q4 to Q2 in every year, so the PA’s finding that retail jobs have fallen in the first half of this year is also true of every other year since records began.

By looking at yearly averages, we can better understand the long term trend in retail jobs.

The data estimates that the number of people employed in retail is relatively stable over the past few years but is not keeping pace with job growth in the rest of the economy. 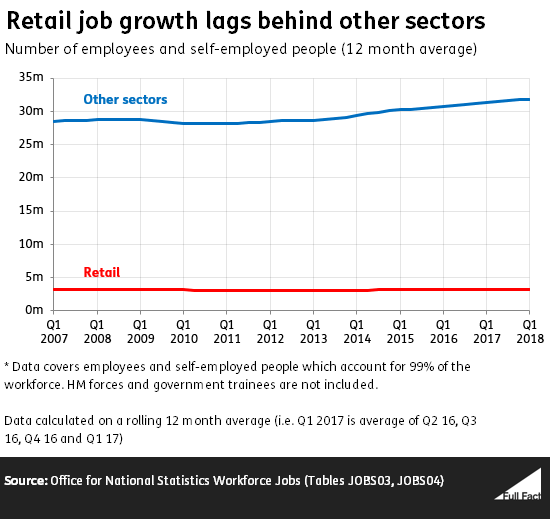 In summary, the falls we’ve seen so far this year do not mark 2018 out as a particularly bad year for retail employment – although those figures don’t yet account for the second three months of the year. But more broadly job growth in the retail sector has been lagging behind growth in other sectors over the past decade.

We got in touch to request a correction regarding a claim made by Press Association in the Daily Mail.