How much are charities spending on good works?

Some charities are spending less than half of the money raised by members of the public on good works.

Looking at the ratio of charitable spending on total income doesn't tell us about how well-run a charity is. Charities sometimes have to spend money to make money, and may choose not to spend all of their income at once.

"Some of the UK's biggest and best known charities are spending less than half of the cash raised every year by members of the public on good works, a new research has found."

A report from the True and Fair Foundation 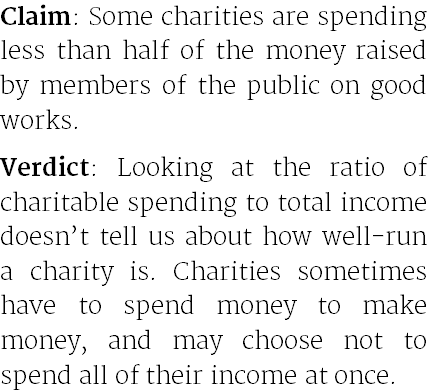 looking
at charitable spending appeared in the Telegraph this weekend. The report looked at various charities' spending on charitable activities as a proportion of their total income, averaged over a three year period.

Looking at the ratio of charitable spending to total income doesn't tell you much about how well-run charities are, or how effective they are at achieving their charitable goals.

That's because charities sometimes have to spend money to make money—for example, paying rent for a charity shop.

Looking at total income, as the report did, doesn't account for charities spending money to raise more money, or for situations when they don't spend all of their income at once.

Sometimes you have to spend money to make money

Charity accounts show all the resources that flow to a charity in a year, whether through donations, investments, or other sources.

This doesn't account for the cost of generating that income. For instance, a charity might pay a fundraising team to help raise donations. This can lower the ratio of 'charitable activity' spending to total income.

The charity spends £70 on charitable works, and £30 on running its shop. Criticising it for only spending 70% of its income on 'good works' wouldn't show the whole picture. If it hadn't spent £30 on the shop, it would only have £50 to spend on charitable activities.

In this case, it would be more helpful to look at the amount of income leftover after the cost of generating it.

Different organisations can have very different ratios purely as a result of how they raise their funding. It's also worth noting that some charities don't receive any funding from the general public.

The report's methodology counts money that should probably be left out

The ratio used in the report includes items of income that cannot always legally be spent, like permanent endowments. This is money or land that is given to a charity with the intention that it will be held forever.

The ratio also includes income that isn't actually received in that year; legacies are recorded when a charity is notified that they've been left a sum in a will, but they aren't received until a person dies.

Looking at short periods can be misleading

Looking at the proportion over short periods raises another problem. If a charity receives an unusually large amount of money in one year, should it spend it over the three year period to meet a spending target, or should it invest it and spread spending over a longer period?

By this particular ratio a charity would look better doing the first rather than the second.

This is precisely what happened to one of the charities highlighted  in the report. The Racing Foundation received a payment of almost £50 million from the Department for Culture, Media and Sport last year. Instead of spending the sum in one year, the charity placed the funds in investments, "with the aim of preserving the capital over the long term and generating investment income to fund grant-making activities".

Full Fact is a registered charity