Income tax: Who contributes what

Income tax is in the news again, with reports of a mooted cut in the top rate of the tax likely to create speculation on how it could affect the balance of who pays what to the exchequer.

Higher earners pay a higher rate of income tax, although that's far from the whole story where overall taxation is concerned. While the richest fifth of households pay over six times as much as the poorest fifth, both groups paid a similar proportion of their income in 2012/13.

But since we may be about to hear a lot about income tax, and income tax alone, here are the figures. 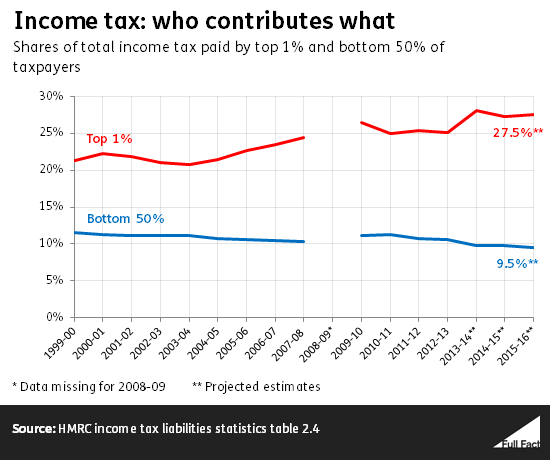 That was the last year before the top rate of income tax was cut from 50p to 45p in the pound. The tax band applies to earnings of over £150,000 per year.

Rising contributions from the top 1% aren't a new trend—back in 1999 the top 1% contributed 21% of total income.

At the same time, the bottom 50% of earners are contributing less in proportion to the highest earners. They gave the Treasury 11.6% of its takings from income tax in 1999, compared to an estimated 9.5% this year.

As a group, workers earning this kind of money are now paying less in income tax as a proportion of their earnings.