Interest payments on the national debt cost the government £46 billion a year.

That’s about right for 2015/16, although the government effectively paid some of that to itself because it went to the state-owned Bank of England. Ignoring these payments, the government spent around £33 billion on debt interest that year.

We spend more on national debt interest payments than we do on education, transport or the police.

This is wrong on education: the government spends £84 billion on education compared to £33 billion on debt interest. Police and transport spending is lower.

Interest payments on the national debt are the fifth biggest item of government expenditure.

Correct. The government spends more on health, benefits, pensions and education (broadly defined) but debt interest takes up about 5% of all government spending (excluding payments to the Bank of England).

"After things like the NHS and pensions, the fifth biggest [government] expenditure, it's not education, it's not transport, it's not the police, it's debt interest on the national debt. It's £46 billion of money I can't spend or nor can anybody else spend on all those goodies that some people think are in the Labour manifesto. We have to live within our means."

That’s about how much the government spent on debt interest in 2015/16. Gross interest payments on central government debt came to about £45 billion and will have been a projected £48 billion for 2016/17, according to the Treasury.

The government effectively paid some of that to itself. Almost a quarter of government debt is owned by the Bank of England, which pays the profit back to the Treasury.

Ignoring interest payments to Bank of England, the government spent £33 billion in debt interest in 2015/16, with estimates of £36 billion and £42 billion for the following couple of years, according to the Office for Budget Responsibility. 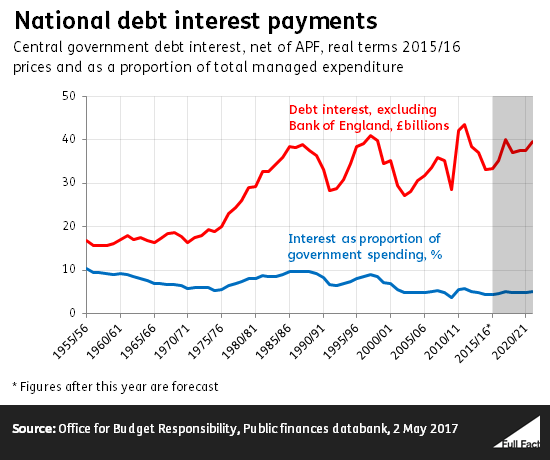 In isolation, those can just look like big meaningless numbers. It helps to look at it in the light of total government spending (of which net debt interest is about 5%) or the size of the economy (2.5%).

There are lots of ways to slice up government spending. One way is to divide it up according to the different functions of a government, using a method devised by the United Nations. From that angle, debt interest is indeed the fifth biggest item, after spending on health (£139 billion), benefits and tax credits (£125 billion), pensions (£110 billion), and education (£84 billion).

Here’s a breakdown we made earlier. It uses Treasury figures for 2015/16, when net debt interest was at a similar level to defence spending. But as they show, it’s not correct that we spend more on interest than on education—we spend over twice as much on that.