Labour and Conservative records on the national debt

Government debt has doubled under the Conservatives.

The national debt almost tripled under the last Labour government.

Correct in cash terms, but after adjusting for inflation it’s more like doubled than tripled. Public sector net debt, adjusted for inflation, rose by 125% between 1996/97 and 2009/10 – mostly after the recession that began in 2008.

Labour was in power between 1997 and 2010, followed by the Conservatives (leading a coalition and then alone) from 2010 to 2017. The amount of money the government owes has mostly risen over those two decades, under administrations of both hues. In particular, the financial crisis and ensuing recession led to a considerable increase in debt from about 2008 onward.

We don’t examine here how much debt, if any, particular governments’ policies have caused. The facts on debt here shouldn’t be taken as proving that one party is more profligate than the other.

In terms of raw cash, here’s how that debt looks: 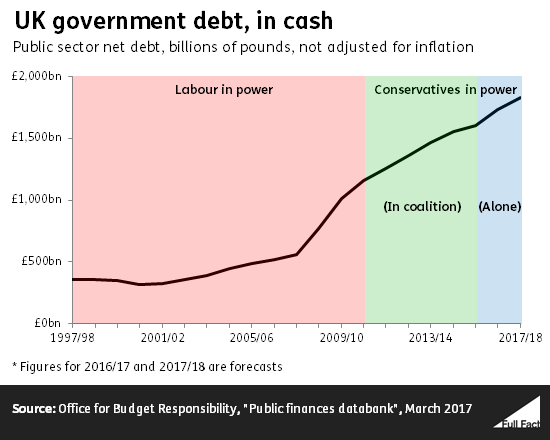 So when the Conservatives say that “during the 13 years in which Labour was in power, there was an almost threefold increase in the national debt”, they’re right if you only take the cash amount owed into account. Public sector net debt was £347 billion in 1996/97, the year before Labour came into office, and £1,011 billion in 2009/10, their last financial year in power.

However, the natural rise in prices means that £347 billion was worth more in 1996 than it looks like now. Taking inflation into account, the trend looks very similar: 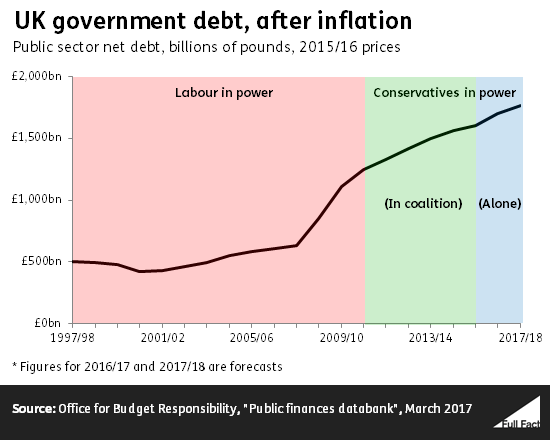 But the rise in public sector net debt under Labour once inflation is accounted for is a considerably lower 125%.

The equivalent figure for the Conservatives up to 2016/17 is 53%. That means that UKIP and other critics of the government are wrong to claim that “the Tories have doubled the national debt”. That would only be true, in cash terms or in real terms, if you started from 2008/09, whereas the first year for which the Conservatives (and their Liberal Democrat coalition partners) can be said to be responsible for the debt is 2010/11.

As we go into at greater length in our explainer on “how much the government owes”, it’s common to look at government debt compared to the size of the national economy. The bigger a country’s GDP, the easier it is for the country to support high government debt. 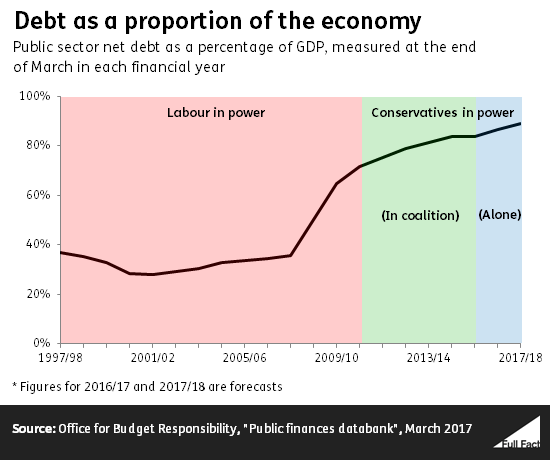 As with the big jumps in the cash amount, that reflects the impact of the financial crisis and the accompanying recession that began in 2008. The reduction in economic activity in that period meant less in tax receipts and higher welfare spending—blowing a hole in the national finances. The much bigger deficits every year added considerably to the overall debt.