The number of social rented homes fell by 420,000 under Labour.

This refers to all homes rented from councils and housing associations. We don’t know what exactly happened to homes for the cheapest “social rent” specifically under Labour, but more of them were built on average between 1997 and 2010 than since 2010.

“The number of social rented homes under a Labour government fell by 420,000.”

The Prime Minister was referring here to the stock of homes rented from councils and housing associations, according to the Department for Communities and Local Government.

There were still around four million homes provided by councils and housing associations in 2016, although the stock had increased by around 76,000 since 2010. 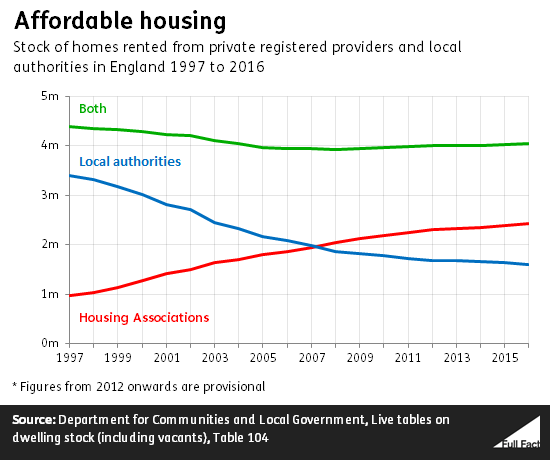 What that increase in the total availability of social housing may mask is a slowdown in provision of the very cheapest homes—those available at a 'social rent' of around half the market rate. 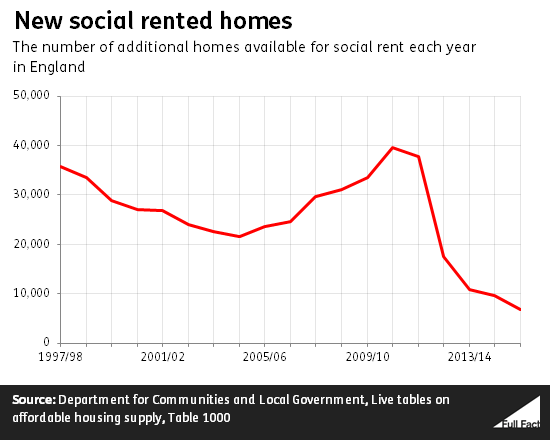 These figures tell us about the number of new homes for social rent becoming available. What about the existing stock of those homes?

We don't have figures going back far enough to compare Labour with the Conservatives, but we can see that the number fell between 2012/13 and 2015/16.

We added more information about homes for social rent over the last few years.