London's productivity lead over the rest of the UK

"Today, every region outside London is below the national average when it comes to productivity, while London is 40% above it."

"…today, every region in England outside London is below the national average when it comes to productivity. While London and the South-East is 40 per cent above it."

Ahead of Ed Miliband's speech in Birmingham today, a Labour Party press release claimed he would say that the productivity of every region is below the national average, apart from London which has productivity 40% above it. This was quoted by the BBC and Daily Mail, amongst others.

To coincide with the speech, another version was released. This said something different; that London and the South-East as a whole is 40% above the average.

We've asked the Labour Party what Mr Miliband means by productivity, and where the figures are from.

A likely source is the latest Office for National Statistics (ONS) data on regional labour productivity. This shows that in 2012 London and the South East were the only UK regions whose productivity was higher than the national average.

The ONS measures regional labour productivity in two ways. Its recommended measure is the Gross Value Added (GVA) per hour worked, and it also produces an estimate of GVA per 'filled job'.

GVA is an estimate of how much is produced using a given input. In the case of workers' productivity, the measures show us how much value is produced for every hour worked in a region or for every job held there. 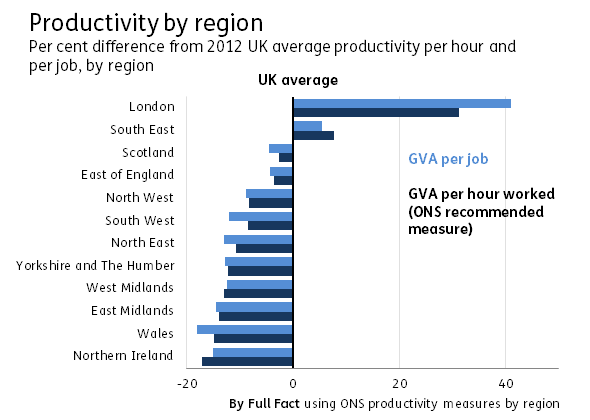 The figures show that in 2012 productivity per hour worked was 31% higher in London and 8% higher in the South East than in the UK as a whole. The equivalent figures for GVA per job were 41% and 5% respectively. All other regions of the UK had below average productivity according to both measures.

But these figures don't tell us the productivity level of London and the South East as a whole.

Since productivity is lower in the South East than in London we know that a combination of the two would have lower average productivity than that of London.

It's possible that Mr Miliband meant to refer to a third measure, that of GVA per head. This compares the output of a region to its population.

But the ONS says this isn't a good measure of regional productivity because it compares the output of workers to the number of residents.

This means the measure will tend to overstate productivity in regions where large numbers of people commute in to work but live elsewhere.

We're waiting for Labour to explain where their figures are from.