Will one third of millennials rent for their entire lives?

Up to a third of millennials face renting their entire lives.

This is based on a projection made by the Resolution Foundation. Their “pessimistic” UK scenario says 66% of families where the head of household was born from 1981-1995 will own their own home by 2060. Their “optimistic” scenario says 73% will.

“Up to a third of millennials 'face renting their entire life'”

The BBC is quoting the Resolution Foundation think tank, which has developed projections of how many UK millennials will be home owners by age 45, and then by the year 2060 (when most will be of retirement age).

These projections are by no means certain, and make a number of assumptions about what could happen to the economy and housing market in the next ten years, as well as the impact of inheritance from parents.

Given this uncertainty, the research also looks at ‘optimistic’ and ‘pessimistic’ scenarios of what might happen. Those suggest between 66% and 73% of millennial families will own their own home by 2060. By comparison, in 2016 they find 77% of pensioner families owned their own home.

What we refer to as a “family” is called a “benefit unit” by the Resolution Foundation. Single people and cohabiting couples both count as a single benefit unit. The “age” of a family/benefit unit is defined by who is the head of the household.

What is the current housing situation for millennials?

Among households in England where the primary owner or renter is aged 25-34, 37% owned their home in 2016/17. That rises to 52% among those aged 35-44. Among both groups, the level of home ownership has fallen significantly in the last decade. 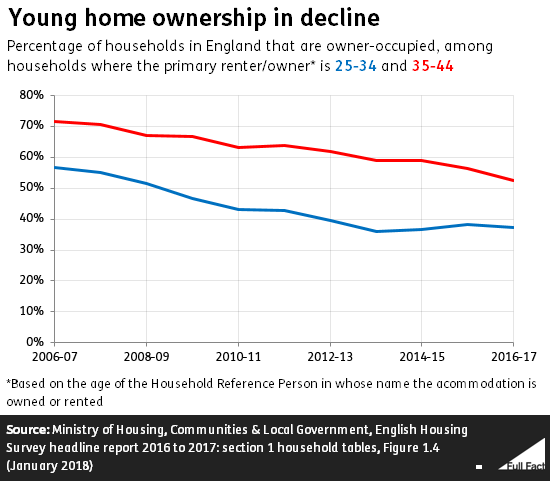 In September 2017, the Resolution Foundation found that, across the UK, around 10% of families where the head of household was born from 1986-1990 owned their own home by age 25, and around 15% of the 1981-85 generation did so. That compares to 77% of pensioner families owning their home in 2016. Their graph (below) demonstrates this: 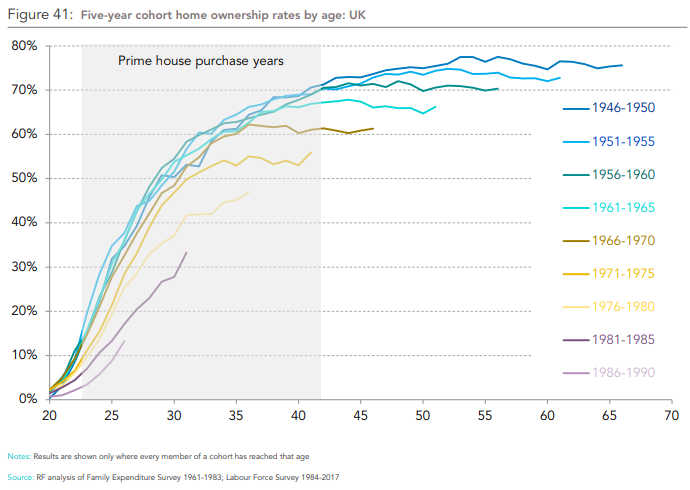 They say that “it is uncertain if the low homeownership rates for younger people will be reversed over the next decade”.

They point to research they have done previously which uses various surveys and assumptions about possible economic situations to assess what the situation will look like for millennials in ten years’ time.

They model both an “optimistic” and “pessimistic” scenario, based on different economic and housing market conditions. They add that “reality is most likely to lie somewhere between” to the optimistic and pessimistic scenario.

This assumes a similar situation over the next ten years to the period 1981-1991; when house prices rose above incomes at a slower rate than in the 2000s, 100,000 properties were sold through the Right to Buy policy, and access to credit was made easier. They note that this scenario is “extremely” optimistic.

As shown in the Resolution Foundation’s graph below, it’s expected that 64% of that group would own their home by the age of 45. 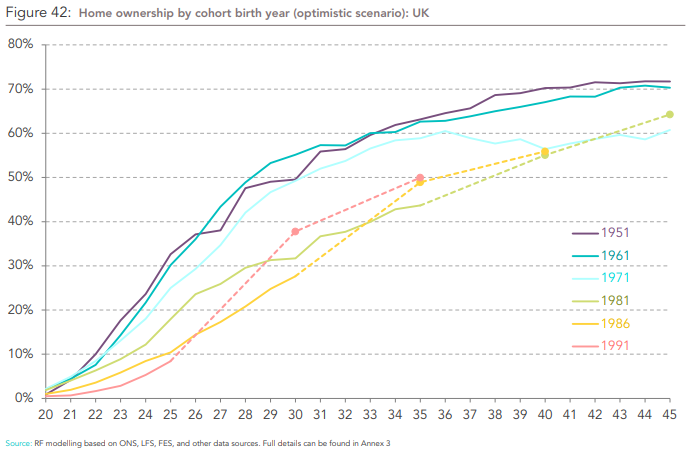 On top of this, they forecast that inherited parental wealth could boost home ownership levels after the age of 45—bringing it up to 74% by 2060.

77% of pensioner families owned their own home in 2016, so the comparative levels are fairly similar. They do note that millennials will typically become home owners at a later point in life than the current generation of pensioners did.

This scenario is based on similar conditions to those experienced from 2001-11, where “the house price to income ratio rose significantly, the average loan-to-value ratio fell by 11 percentage points and Right-to-Buy sales declined by an average of 15 per cent per annum”.

They say this scenario is by no means certain, noting that “the government’s current house building targets, for example, are higher than the assumptions we model here”.

Once again, they also factor in what the impact of parental inheritance could be. As more millennials would not be home owners in this scenario, more would be likely to buy homes through inheritance instead. Overall, this means that 66% of millennials born from 1981-1995 would own their own homes by 2060 in the pessimistic scenario.

We got in touch to request a correction regarding a claim made by Lynn Davidson in The Sun.