About 31.5 million people are employed in the UK. 26 million were born here and 5 million abroad. 28 million are UK nationals and 3 million are foreign nationals.

These aren't the number of jobs. One person can have more than one job: there are around 34 million workforce jobs in the economy. But there aren't any published figures provided by the Office for National Statistics that show whether British or foreign workers hold them.

Recessions aside, the total number of people in work almost always rises as the population increases. But that's not the same for everyone: some people fall out of work while others enter it. When employment increases, all we know is that more people are finding work than are losing it.

So just because employment overall goes up doesn't mean that employment's rising for everyone. If 100 more people are in work since last year, it could be that 300 more British nationals are in work and 200 fewer foreign nationals are. 100 is the difference.

This wouldn't mean that British nationals had taken 300% of new jobs. 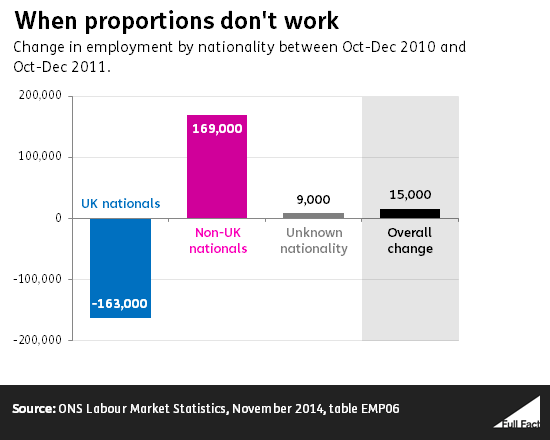