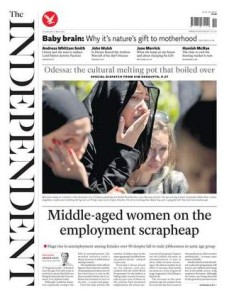 As news from the jobs market has improved over recent months, much of the political controversy has shifted to focus on the groups 'left behind' by the economic recovery.

Today's Independent front page identifies one group that it claims is continuing to struggle: middle-aged women, who the paper's headline suggests are being left on the "employment scrapheap".

While there has been an increase in the number of women over 50 categorised as unemployed, the number in this age bracket who are working has also increased. Increasing numbers of women are remaining economically active past 50, which is likely to be driving the rise in both employment and unemployment.

Most of these women were in the 50-64 age group, with just 12,000 over-65s reporting as unemployed in the latest period.

However these figures also bear out the government's response, that "the proportion of women between 50 and 64 who are in work is at its highest level ever - 63.2 per cent, compared to 58.6 per cent in 2010." Over the same period, the number of over-50 women in employment has grown by 473,000. 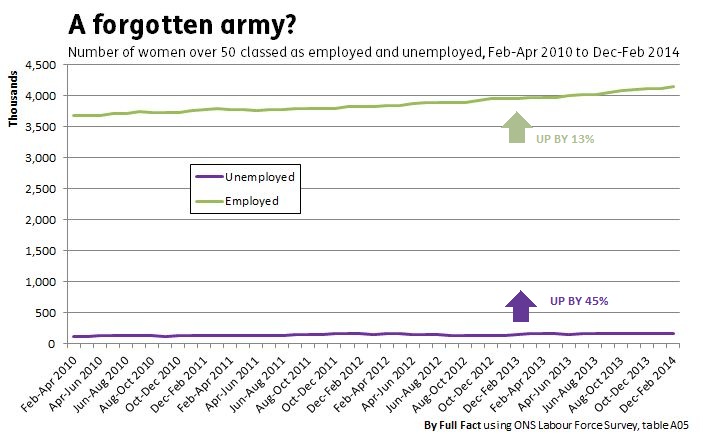 Partly this rise in the numbers of both unemployed and employed older women is due to demographic factors: the population of female over-50s has risen by 643,000 to nearly 11.8 million over this period.

However this doesn't entirely explain it: if we look instead at the proportion of all women in this age bracket who are employed and unemployed, we can see that both the employment rate and the unemployment rate have also risen.

The reason for this is that more women over 50 are remaining or becoming 'economically active': that is they are either continuing to work or to look for work rather than, say, retiring or acting as a housewife.

This trend of increasing economic activity in later life might be particularly stark for women, as the age at which they can claim their state pension is gradually being increased from 60 in 2010 to 65 in 2018.