The budget deficit has fallen by two thirds since 2009/10, just before the Coalition came into power.

“We inherited in 2010 a budget deficit that was running at over 10% of our GDP and we have brought that down by two thirds over the last six years.”

Those figures are correct. 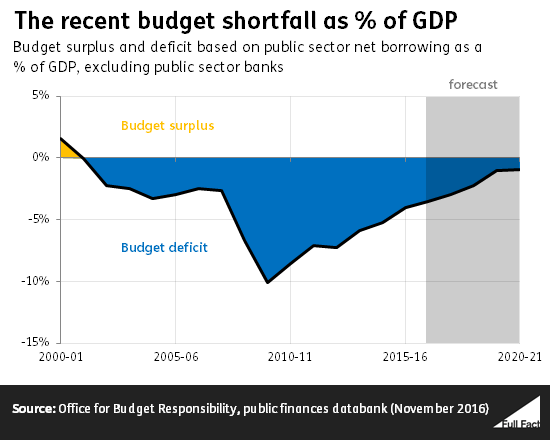 The Coalition government had said it was going to reduce the deficit by more than that. In its first budget, it said that it would eliminate what’s called the ‘cyclically-adjusted current budget deficit’ by 2015/16.

That’s a narrower measure of the government’s deficit. It doesn’t include investment spending, and it’s adjusted to take into account of whether the economy is in a ‘boom’ or ‘bust’ period. Over the past 10 years, the cyclically-adjusted current deficit has been about half of public sector net borrowing.

By focusing on the cyclically-adjusted current budget deficit, the coalition government aimed to avoid creating an incentive to cut investment spending unnecessarily, and to give itself the flexibility to deal with potential economic crises.

But the cyclically-adjusted current budget deficit wasn’t eliminated. It did roughly halve, falling from a cash value of about £72 billion in 2009/10, to about £38 billion in 2015/16.

By implication, the broader measure ‘public sector net borrowing’, which Mr Hammond was referring to, didn’t fall by as much as the Coalition hoped for either.