“Will he [David Cameron] express some concern at the way that homelessness has risen in this country for the past six years and looks like it is going to continue to rise?”—Jeremy Corbyn

It’s correct that recorded homelessness in England has risen over the past six years, according to official figures. Around 58,000 households were accepted by councils as entitled to be housed in 2015/16, compared to 40,000 in 2009/10. 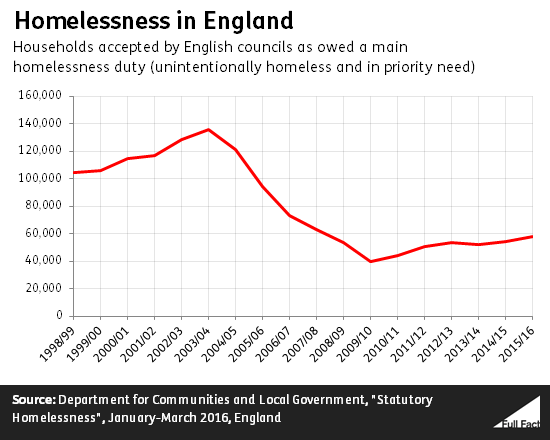 These ‘statutorily’ homeless households are entitled to help because of a law, or ‘statute’. They must show the show the council that they are homeless unintentionally and that they are part of a priority need group to qualify.

In the past ten years, about a quarter of all applicants each year have been classed as homeless but refused housing because they don’t meet these criteria. There have been about 30,000 cases like this, on average, each year in the past decade. But they don’t show up in the graph.

Crisis, a charity, argues that the figures don’t tell the full story of homelessness for other reasons as well.

Local councils increasingly use informal measures to tackle homelessness. Since the way the statistics are collected doesn’t reflect how the methods for tackling homelessness have changed, Crisis says that “we can no longer rely on these figures to show national trends”.

It reports “worsening conditions on the ground”, and the official figures show a slight increase in households accepted as statutorily homeless during the first quarter of 2016.

“Homelessness is still 10% below the peak that we saw under Labour, but the key is building more homes. We have built 700,000 homes since I became Prime Minister, but now we need to quicken to pace on that”—David Cameron

The first claim is wrong. Statutory homelessness is much more than 10% below the peak reached under Labour, as our chart above suggests. New cases are running 57% below the level of 2003/04, when 135,000 households were accepted by councils as entitled to housing.

Mr Cameron has previously claimed that homelessness is “less than half what it was at its peak under the last Labour government”.

His diagnosis of the ongoing problem is shared by the House of Commons Library, which says that the most important factor behind the rise in statutory homelessness is “the continuing shortfall in levels of new house building relative to levels of household formation”.

It’s correct that over 700,000 new homes have been built in England since Mr Cameron became Prime Minister, in the second quarter of 2010. But this is below average for the past few decades, and the Office for National Statistics notes that “2012/13 featured the lowest level of house building in the UK for any peacetime year since the 1920s”.

"I have been listening carefully to what the Home Secretary has been saying over the past few days. She said: 'It’s harder than ever for young people to buy their first house.' Does the Prime Minister think that is because of record low house building or his Government’s apparent belief that £450,000 is an affordable price for a starter home?"—Jeremy Corbyn

In the speech launching her leadership bid Theresa May, Home Secretary until this evening, did say: “It’s harder than ever for young people to buy their first house” and that more houses need to be built.

The number of new homes being built has been falling since the 1960s, and recent years have seen the fewest new homes completed per year during peacetime since the 1920s. 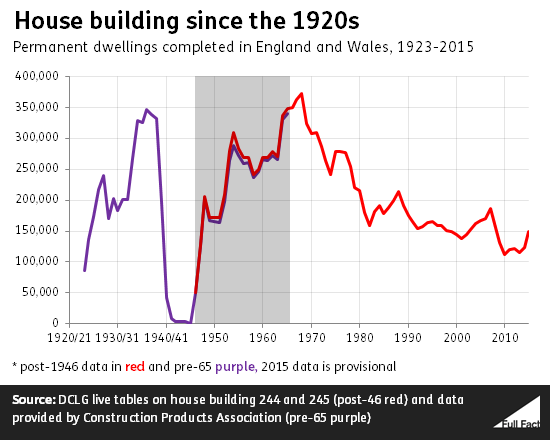 Starter homes are defined in the recent Housing Act as new homes available for first-time buyers at a discount of at least 20% of their market value, at a maximum price of £450,000 in Greater London or £250,000 in the rest of England.

They are described later in the Housing Act as a type of “affordable home”.

“As for zero hours contracts, they account for less than one in forty people in work.”—David Cameron

An estimated 2.5% of people in work say that their main job is a zero hours contract, according to the latest official figures—one in forty.

“We’ve been able to back our NHS with the 10% funding increase, over £10 billion in real terms in this parliament”—David Cameron

At last week’s Prime Minister’s Questions, Mr Cameron said the NHS budget in England will go up by £19 billion this parliament. This is based on the same spending figures, but doesn’t take into account the fact that prices in general are likely to be more expensive then, so the funding increase won’t be worth as much as this.

An independent analysis of the government’s plans suggests health spending outside of NHS England’s budget—like public health spending—will actually fall over this parliament.

That means the ‘bigger picture’ increase in total health spending looks more like £4.5 billion, in real terms, over this parliament.