Under the Conservatives, the state pension has risen by over £1,450.

“What we have seen under Conservatives in government is the basic state pension rise by over £1,450 per year”.

At Prime Minister’s Questions last week Theresa May said that under recent Conservative-led governments the basic state pension has increased by over £1,450 per year.

But this figure doesn’t account for the fact that prices have also risen over the last eight years, meaning with the same sum of money today, you can’t buy as much as you could eight years ago—an effect known as inflation.

Factoring that in, since the Conservatives have been in government the basic state pension has increased by around £550 in today’s money.

What do pensioners actually receive?

Change to the state pension isn’t the only thing that’s impacted pensioner incomes over this time. Changes to the level of things like benefits and private income have also had an effect.

(A pensioner unit is either a single pensioner or a couple of whom at least one is above pension age.) 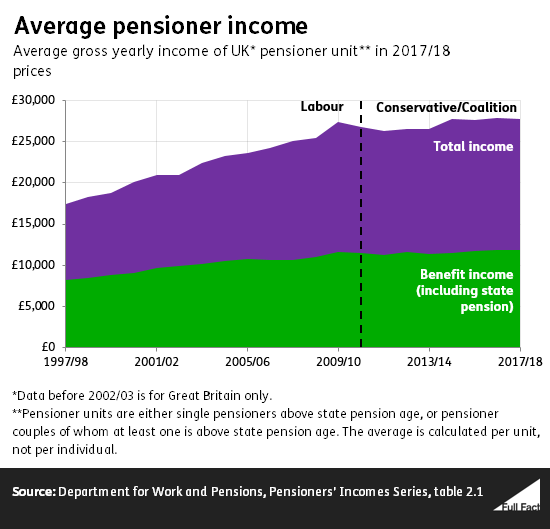 Of that £936, £416 was down to increases in state benefits (including but not limited to the state pension) while the rest was due to other incomes including private or occupational pensions.

So since 2010/11, the average pensioner unit has seen an increase in their income of around 2% before taxes as a result of government changes to benefits.