Is public spending in Scotland lower than the UK average?

Free prescriptions, free social care for the elderly, free university tuition...Many would argue that Scotland's has - compared to the other home nations - been more sheltered from the impact of UK-wide cuts to public spending.

Meanwhile the most recent British Social Attitudes Survey suggests that 4 out of 10 of those living in England believe that the Scottish aren't paying their way - the implication being that the UK Treasury is subsidising a massive transfer of funds north of the border.

But last week Scotland's First Minister Alex Salmond attacked the idea that Scotland spends more than it contributes. While he argued that Scotland paid more in tax revenue per head than the UK average, he also insisted that the country spends less on its public services and state benefits:

"spending on the welfare state in Scotland is a SMALLER share of our economic output than is the case for the UK and more of our EU partners."

According to statistics recently released by the Scottish government, public spending in Scotland constitutes a smaller share of the country's Gross Domestic Product (GDP) relative to the UK average. In other words, less of Scotland's overall budget is allocated to public spending.

This data includes all spending undertaken by the UK Government on behalf of Scotland - not just expenditure on health, education and social security but also UK-wide public spending on defence, debt interest and financial interventions (or nationalising the banks).

If we look specifically at spending on welfare, we can see that Scotland not only ranks below the UK for social benefit spending per head, but also behind all bar one of the EU 15. 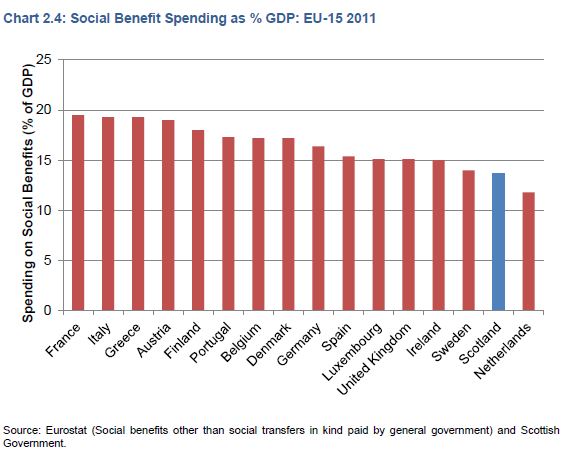 Not the whole story?

In the lead up to the referendum on Scottish independence, it perhaps isn't surprising that these aren't the only statistics that have been produced on this subject. Alongside the Scottish Government's figures, we also have numbers generated by the UK Treasury.

According to Treasury data, in 2011/12 public spending per head for Scotland was higher than the UK average (£10,700 per capita compared to £8,745). Of the other home nations, only Northern Ireland has a higher spend per head. 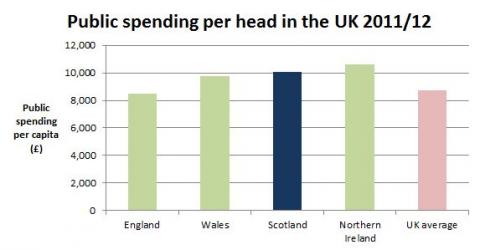 The reason why the Scottish Government has produced statistics that are at variance with other estimates is because it has assumed that Scotland earns a greater share of money from North Sea oil. If tax receipts are allocated 'geographically', the Scottish Government argues that Scotland earns some 90% of the revenue from this resource. If, on the other hand, tax receipts are distributed equally among the UK nations (on a so-called 'per capita' basis), then Scotland claims a smaller share.

The Scottish Government itself notes that using one measure or the other makes a considerable difference to the numbers. In its most recent briefing, the statisticians have only produced calculations on a geographic basis. Using this measure, 42.7% of Scotland's GDP is allocated to public spending, while the equivalent figure for the UK is 45.5%. In other words, public spending in Scotland is lower than the UK average.

But, if we apply the per capita principle (which is less generous towards Scotland's bank sheet), public spending is now at 51.7% of GDP - an increase of some 9%, and now more than 6% higher than the UK average. The Scottish Government's statisticians make a point of generating separate 'geographic' and 'per capita' estimates. However, it's likely that we'll continue to see politicians on both sides of the debate picking and choosing their figures.