That's right in cash terms - consumer prices have gone up by about 14% over the same period. The 25% increase is for 'regulated' fares, which make up about half of all fares.

"Analysis by Labour shows that since 2010, commuters' rail fares have risen by 25 per cent on average"

Rail fares rise every January. This year 'regulated' fares—which include season tickets for most commuter journeys and off-peak fares on most journeys between major cities—are up by 1%.

Fare rises in the six years from 2010 add up to a 25% increase in average regulated fares in cash terms.

There are a couple of things to note about that number.

One, it doesn't take into account the way the value of money changed over the period. Over the same period consumer prices more generally rose by about 14%—that's using the main headline measure of inflation, CPI, and the latest figures which go to last November. So the fares rose almost twice as fast as inflation over the period.

Two, this doesn't mean rail fares as a whole are up by 25% in cash terms. The House of Commons Library says that about 45% of rail fares are regulated. Unregulated fares include first class fares, advanced purchase tickets, and some saver tickets.

This year the average rail fare rose by slightly more than the average regulated fare—a rise of 1.1% compared to 1%. In previous years the opposite has been the case. 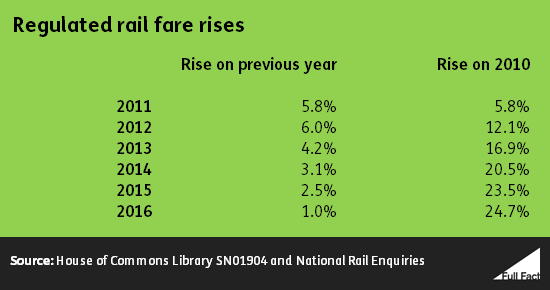