Cuts to income tax will save the typical basic rate taxpayer £1,205 a year.

But this figure doesn’t account for the fact that prices have risen over the last ten years, meaning you can buy less with the same sum of money today than a decade ago—an effect known as inflation. Factoring that in, the amount kept by the taxpayer is the equivalent of about £940.

But for some families, these savings could be cancelled out by changes to other taxes. For example the Institute for Fiscal Studies found that when looking at the changes all taxes and benefits as a whole, rather than just income tax, there had been “significant reductions in household income” for low-income households between 2010 and 2015.

For most people there is a set amount of money that you can earn without having to pay any income tax—known as the personal allowance. Some very high earners don’t receive a personal allowance, or have it reduced.

At the moment the personal allowance is £11,850 and at the Budget last week the Chancellor announced that from next April the personal allowance will increase to £12,500 and keep increasing until it’s around £13,310 in 2023/24. There are some exceptions to this—for example, you can have a different personal allowance if you’re married and over a certain age. The government says that from 2021/22 onwards the increases are based on forecasted inflation (the change in how much things cost over time), and therefore might change.

That means £6,025 of additional income on which no tax is paid in 2019/20. The income tax rate that would have been applied on that income (known as the “basic rate”) is 20%, which works out at £1,205. This is what the government claims it has saved the typical basic rate taxpayer.

Prices have changed since 2010 and it now costs more to buy things, an effect known as inflation, so we need to factor that in too. What matters is how much you can buy with that £1,205, and as inflation goes up, this will go down. 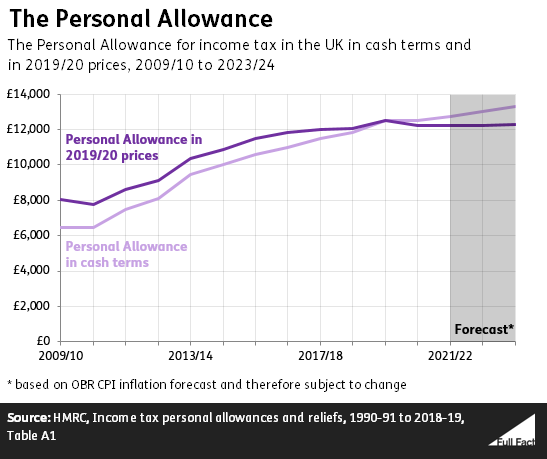 Of course this won’t necessarily be the experience of every taxpayer and it doesn’t factor in any other changes that have been made to the tax system over that time. Those paying less due to income tax changes might not be taking home more money overall than they were in 2010/11.

In 2017 the Institute for Fiscal Studies found that when including changes to other taxes and benefits such as VAT and child tax credits, changes have led to “significant reductions in household income” for low-income households between 2010 and 2015.