Six million workers are paid below the living wage.

Last year six million jobs were paid below the living wage, but some people have more than one job. We've got hold of some new figures suggesting at least 5.4 million people were paid less than the living wage.

So it's technically wrong to say six million workers were paid below the living wage, as the Mirror has. Curious to know how wrong it is in practice, we asked the ONS if it could tell us any more. It obliged and provided us with additional figures.

An unknown number of other people had more than one job, at least one of which paid less than the living wage. We know there were half a million such jobs, but not how many individuals they were shared between, and not what the total earnings of these people were.

So it's fair to say that more than 5.4 million workers earn less than the living wage.

This has nothing to do with the "National Living Wage" announced by the government this summer. The living wage we're talking about is the level of hourly pay judged necessary to cover the essentials of living.

It has been calculated for London since 2008, and for the rest of the UK since 2012, by two bodies external to the ONS. The living wages rise with inflation, as well as to take into account other changes to income such as benefit entitlements. 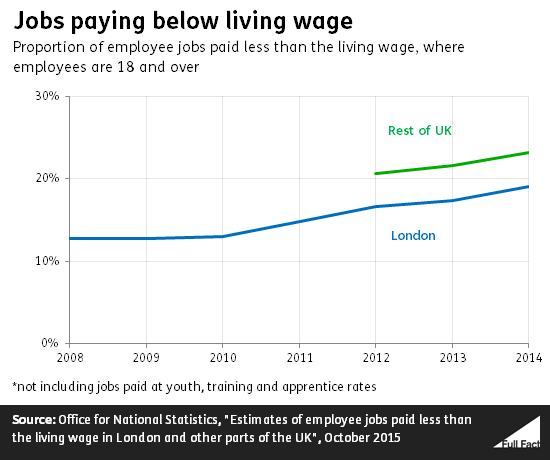