Correct. The number of people in employment fell slightly between April 2019 and July 2019, though the employment rate is still at close to record highs.

Incorrect. Average employee wages are growing at 1.9% per year in real terms.

“Employment is falling and wages have stopped rising, according to the latest official figures.”

Following the release of the latest labour force statistics the Evening Standard reported that employment is falling and wages have stopped rising.

It’s incorrect to say that wages have stopped rising. Wages for employees in Great Britain are growing at the same level they have been growing for several months. 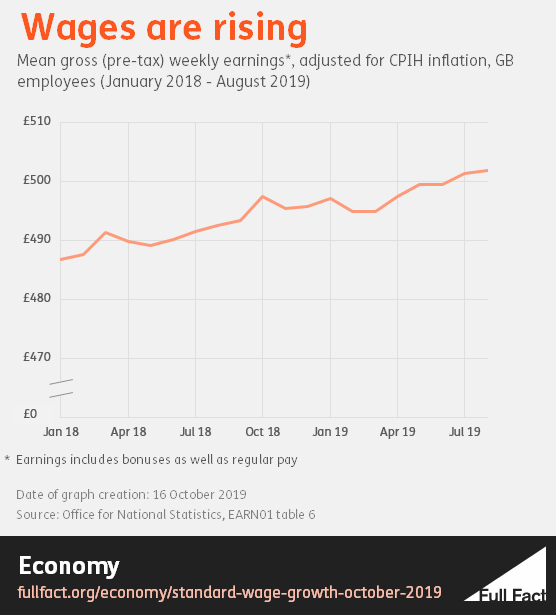 That’s technically accurate, but it’s incorrect to say this means “wages have stopped rising”, as the Standard does in the article’s first paragraph and on its twitter account.

Putting this aside, the Evening Standard doesn’t seem to have adjusted its wages figures to account for the change in how much things cost over time (inflation). It’s better to look at wage growth in real terms (adjusting for inflation) because it tells us whether wages are growing faster than prices are rising.

Average employee wages are growing in real terms by 1.9% per year which has been fairly constant for the past few months. Average wages are still below their pre-financial crisis high and you can read more about how wages have changed in recent history here.

We got in touch to request a correction regarding a claim made in The Evening Standard.