Take home pay and worklessness: what do the figures say?

The minister was asked to respond to comments on the government's welfare reforms from the leader of the Catholic church in England and Wales, Archbishop (now Cardinal) Nichols. Mr Duncan Smith said:

"It'd be good if he'd called me before he made these attacks because most of the facts they put in were incorrect. Disposable income for example, at the moment is at its highest level it has been for a long time."

Cardinal Nichols made a series of media appearances last month in which he lamented that people were being left in a "destitute situation" by what he saw as flaws in the welfare system. Similar sentiments were expressed in a letter written by 27 Anglican and other clergy which made a number of specific statements about the cost of living.

The letter claims that "flat wages" and rising food costs are contributing towards an increase in those unable to afford the basics. The minister's claim refers to something different — the disposable income of families. Rather than looking at wages alone, this shows us the amount left for households to spend after taxes have been deducted and benefits added.

As we covered last autumn, it is correct to say that total disposable income has risen. But this doesn't mean the bishops were wrong; wages have fallen since 2010.

Worklessness under the coalition

Mr Duncan Smith also pointed to the falling numbers of workless households - those where no-one of working age is in employment - as evidence that the government's welfare reforms are working:

"The number of workless households under previous governments rose consistently. It has fallen for the first time in 30 years by nearly 18%."

This is not supported by the latest ONS release on the subject, which shows the number of workless households has fallen by 11% since 2010. And this isn't the first time it has fallen in recent history; before the financial crisis the general trend was downwards. 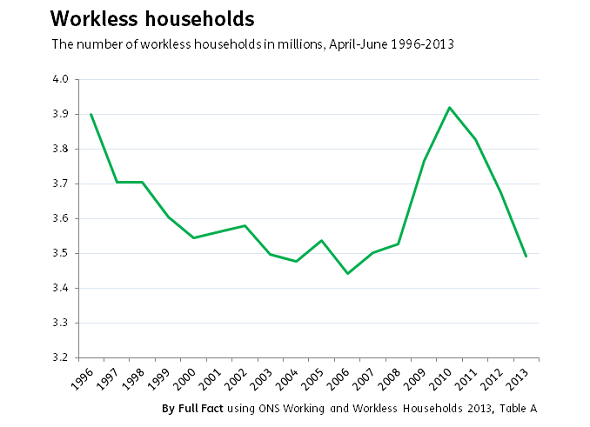 The number of households where every adult has never worked has fallen by 18% since 2010, halting an upward trend. 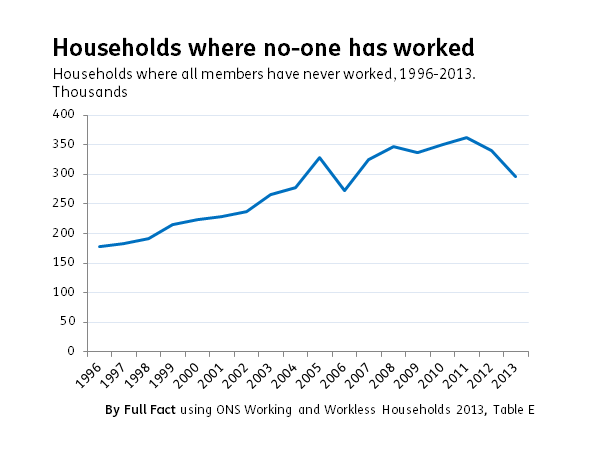 The Department for Work and Pensions told us that the confusion of the two figures was likely to be a mistake, but we're waiting for confirmation about what Mr Duncan Smith intended to say and will update as necessary.