Tax evasion and avoidance: how much can be raised?

"We will raise at least £5 billion from continuing to tackle tax evasion, and aggressive tax avoidance and tax planning, building on the £7 billion of annual savings we have delivered in this Parliament." Conservative Manifesto

"Under the last Labour government the tax gap was falling by £1.5bn a year on average between 2005-06 and 2009-10. But under the Tories it has been increasing by an average of £1bn a year...[Labour would cut] tax avoidance and evasion by £7.5bn a year — with the ambitious goal of doing so by the middle of the next Parliament." Labour press release, 11 April 2015

Few tax-raising pledges are as popular with the electorate as those that promise to crack down on tax avoiders and evaders. In fact if one poll is to be believed, over half of voters think the pledges made by the three main parties don't go far enough.

But whether or not the sums these parties have promised to extract from 'tax dodgers' are worth the paper they're written on is contentious. The IFS has described them as "plucked out of thin air" and the parties themselves have provided precious little detail about how the anti-avoidance measures they propose would work in practice.

In fact, it's difficult to even judge how much has been raised through such crackdowns in previous years. We have some idea about the size of the gap between what the taxman should be collecting and what actually is collected, and we can measure the impact of some interventions targeted at specific schemes. But the complexity involved in the tax system and how people respond to changes to it mean that any figures on money raised through anti-avoidance measures must always be estimates, in this case very uncertain ones. That means they need to be treated with some caution.

What do we mean by tax avoidance/evasion?

Tax avoidance isn't illegal: it's the practice of using — some would say exploiting — current tax laws to minimise your tax liabilities. HMRC distinguishes tax avoidance from ordinary tax planning by saying that tax avoiders are "operating within the letter, but not the spirit of the law." Practices such as using a tax-free ISA to the full extent aren't considered to be tax avoidance.

Tax evasion, on the other hand, is illegal. This is where an individual or business fails to comply with existing tax laws, for example by omitting or concealing information about their accounts.

Did the tax gap widen under the Coalition?

At first glance, it might seem like the Conservatives and Labour are flatly contradicting one another over the Coalition's record on tax avoidance. While the Conservatives claim that they raised £7bn through cracking down on tax abuse, Labour accuses them of letting the 'tax gap' widen.

In cash terms, Labour is correct to say that the tax gap has widened under the Coalition government. In 2009/10, the last financial year of the previous Labour government, it stood at £31bn, whereas in 2012/13 — the last year for which there is data — HMRC estimated the tax gap at £34bn.

But this isn't necessarily the best way to measure the tax gap. Inflation means that cash sums don't give an accurate picture of the real change, while people's tax liabilities — the total pot that HMRC should be collecting from — will also vary from year to year. A more useful way to measure the tax gap is to take it as a proportion of liabilities.

Doing this shows that the percentage tax gap has actually fallen slightly, from 7% in 2009/10 to 6.8% in 2012/13. However the tax gap isn't in itself a measure of tax avoidance or evasion, it's the amount HMRC thinks it could collect if everyone complied fully with the letter and spirit of current law. 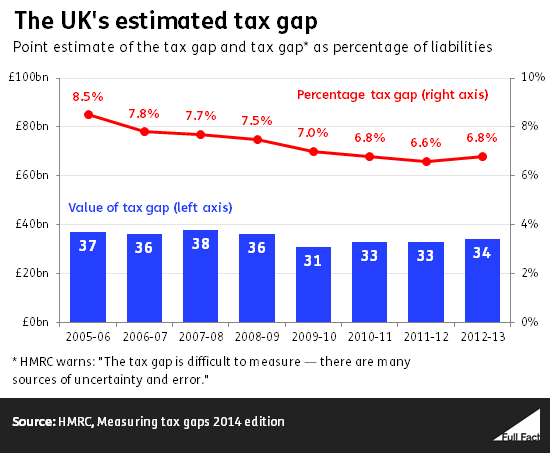 While HMRC estimates the total tax gap at £34bn, only £7.2bn of this is attributed to tax avoidance and evasion. This could cause some confusion: after all, if the taxman is only missing out on £7.2bn a year from tax avoiders and evaders, how can Labour pledge to raise £7.5bn a year from them?

There are a number of possible explanations for this. For example, the government could impose fines on offenders that are larger than the tax that was avoided or evaded. Labour may also have a more expansive definition of tax avoidance and evasion, including those that HMRC categorises under the 'hidden economy' (which accounts for a further £5.9bn of the tax gap).

Whichever way you look at the figures however, the increase or decrease is well within the margin of error. According to the data published by HMRC, the true amount of uncollected tax could be anywhere between £28bn and £44bn most of the time, which is why it warns that "the tax gap is difficult to measure — there are many sources of uncertainty and error." It's therefore impossible to say whether the small changes noted by Labour are a product of this uncertainty and scope for error, or reflect a genuine change in the scale of uncollected tax.

Has the government already saved £7bn from tax dodgers?

Again, the fact that the tax gap for avoidance and evasion — as Labour measures it - hasn't shrunk doesn't necessarily mean that the Conservatives are wrong to say that the Coalition delivered £7bn from targeting these problems. However details on this supposed saving are thin on the ground.

We know from last year's Autumn Statement that this includes the £1.9bn raised from a deal with the Swiss authorities which allowed those holding assets in Switzerland liable for UK tax to clear unpaid debts to HMRC with a one-off payment. It's worth noting that the Office for Budget Responsibility (OBR) reported that this is significantly less than the £5.3bn HMRC initially expected to collect, giving some idea of the problems associated with costing anti-avoidance measures.

The OBR told us that the £7bn figure used by the Conservatives was not one they have directly checked, even though the Chancellor also referenced it in December's Autumn Statement. However they did say that it was "too early to evaluate" the figure, as much of it relies on projections rather than actual data. As the OBR points out in its Economic and Fiscal Outlook, "avoidance costings are subject to significant uncertainty".

The Conservatives also point to a HMRC report for 2013/14 which found that over the 2010 Spending Review period, HMRC increased its 'compliance yield' — the money generated by HMRC through their efforts to ensure that taxpayers follow tax laws — by £7bn.

While this gives some further detail about the sort of schemes that HMRC is operating to tackle tax avoidance (it mentions, for example, efforts to stop retailers supplying goods from the Channel Islands avoiding VAT and measures to prevent employers from avoiding income tax liabilities by using third-parties as intermediaries), it's worth noting that the estimated savings have proved contentious. They include, for example, money that HMRC expects to collect in future years, and a Commons select committee has said it isn't clear whether the reported yield for 2013/14 represents "a real additional cash revenue benefit in that year."

Are the projected savings reasonable?

Given the difficulty in identifying how much may already have been collected from would-be tax avoiders or evaders, the figures put forward for potential future savings should unsurprisingly be treated with some caution.

The IFS is blunt. It says: "The figures being cited by each party appear to have been plucked out of thin air. They may be achievable but the parties have given us little indication of how they would be achieved, or who would pay the extra tax."

While there are differences in the approaches laid out by the various parties — for instance, Labour advocates removing non-dom status, which allows some to avoid paying tax on overseas earnings, while the Conservatives have pledged to increase the charge levied against them without abolishing the status itself — there has been no public attempt to put a figure on how much they expect to generate from these policy changes.

The IFS has said that Labour's proposal to scrap non-dom status could end up costing the Treasury money if large numbers of high-earning individuals choose to leave the UK rather than stump up the extra tax levied against them. Then again it could raise money as well; there's no way to be certain of what will happen.

The best we can do in these circumstances is to look at the taxpayers that are likely to be affected. The most recent data we have suggests that there are around 123,000 people registered as non-doms for tax purposes, who collectively contribute around £226m via the charge they pay to avoid being taxed on foreign earnings, and pay a total of £4.6bn in income tax (according to a Freedom of Information request by the Financial Times). This suggests that there might be a sizeable pot of earnings currently out of HMRC's reach, but we don't know whether these people would be prepared to leave the UK to prevent the taxman from being granted access to it.

Are avoidance/evasion savings ever measurable?

The savings attributed to anti-avoidance measures usually come with a warning attached: all of the costings produced by the Treasury for the policies announced in the last Autumn Statement were given a 'medium' to 'very high' uncertainty rating by the OBR (with the largest savings also being those that were most uncertain).

The reason for this is that those looking to avoid tax may change their behaviour in response to a change in the law, or may find alternative avoidance schemes before legislation can catch up. This means that the tax currently avoided through these schemes is not necessarily the same as what would be recovered if they were closed — the participants may simply move their money elsewhere.

The Coalition introduced a General Anti-Abuse Rule that aimed to make it an offence to use 'abusive' tax arrangements in principle, without the need to explicitly legislate against individual schemes. However HMRC has so far only attributed around £59m per year in extra compliance yield from its operation. Labour and the Liberal Democrats have both proposed extending the rule's scope.

There is hard data on the money the taxman recovers via the courts: HMRC reports that it was awarded £2.7bn via the anti-avoidance cases it took to court in 2013/14.

But it's difficult to know how much of this is additional money to that which would have been recovered anyway: HMRC routinely challenges evasion in the courts regardless of policy changes, and the amount they recover in any given year will depend upon how many illegal activities are detected.