The UK will cut aid this year, but barely did last year

The UK was the only G7 nation to reduce aid spending in 2020.

This is true, but misses out the wider picture. The UK reduced spending by 0.006 percentage points of national income in 2020, but was still the second-highest spender on aid in the G7 that year.

The UK is the only G7 country to be reducing aid spending in 2021.

This may be true, but we don’t yet have enough evidence to be sure. The UK certainly plans to reduce aid spending significantly in 2021. Most other G7 countries plan to increase it. We don’t yet know whether they all will, on all measures.

The government’s decision to cut aid spending [makes it] the only G7 country to do so.

The Prime Minister will walk into the G7 summit as the only leader who is cutting development aid to the world’s poorest.

On Wednesday, opposition parties said the UK is the only country in the G7 to be reducing foreign aid. On Thursday, a New Statesman article said it was the only G7 country that had  reduced aid last year.

Earlier in the week, a group of charities had released an open letter, in which they said that “While other G7 countries have stepped up their aid budget, the UK is the only one to have rowed back on its commitments."

Where 2020 is concerned, the claim by the New Statesman is potentially misleading. The supposed “cut” last year was extremely small—from 0.704% of national income to 0.698%—and the UK’s actual aid spending remained much higher than all other G7 countries, except Germany.

The picture in 2021 is less clear, in part because we don’t yet know what any country’s total national income will be.

The UK does plan a more substantial reduction this year—down to 0.5%—while most other G7 countries appear likely to raise their spending, at least on some measures.

How does the UK compare on aid?

There are many different ways to measure how much a country spends on foreign aid. In cash terms, the US is the world’s biggest donor, but the US has a very large economy, so it also has more money to spend.

Since 1970, many countries have endorsed a United Nations pledge to spend 0.7% of their Gross National Income (GNI) on aid each year. In practice, they have often failed to do so.

The UK has spent almost exactly 0.7% of national income every year since 2013. However, it announced plans last November to reduce this to 0.5% from 2021.

Spending 0.5% of national income on aid would be high by the UK’s historic standards, although it breaks a Conservative manifesto pledge and a legal commitment to maintain the level 0.7%. We have written another article that explains this in more detail.

The New Statesman claimed in a headline, and on its “Chart of the Day” that “The UK was the only G7 member to cut foreign aid last year”. 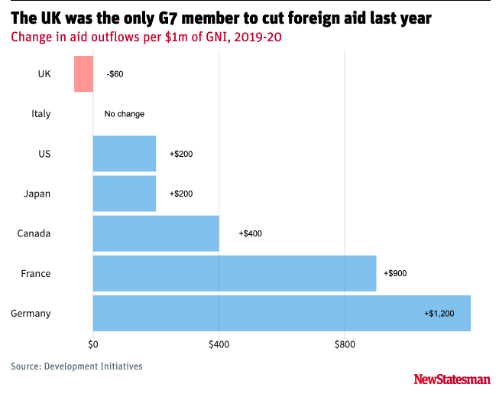 This is true, but misleading, because it says nothing about the overall spending levels themselves.

So the claim is true, but it leaves out the larger picture: that the UK’s aid spending was essentially unchanged in 2020, making it the second-highest donor in the G7, and still spending more than twice as much as Japan, Italy, the US or Canada.

It is not yet possible to know how much these countries will spend on aid as a proportion of their national income this year. Some projections suggest it will be higher than these figures.

Mr Miliband and Mr Blackford also claimed that it would be the only G7 country reducing aid this year. This appears to be a reference to the planned reduction from 0.7% to 0.5%.

When we asked them for the source of the claim that the UK was the only country, Mr Blackford’s office told us that it came from a New Statesman article, but did not specify which one. We can’t find a New Statesman article that makes this claim, and the chart that we’ve already mentioned was published the day after Mr Blackford’s comments, so it’s not quite clear what the source was. We have asked for more clarity on this. Mr Miliband’s office did not reply.

Both politicians’ comments resemble a claim made by many charities, academics and universities in an open letter on 6 June, which said: “While other G7 countries have stepped up their aid budget, the UK is the only one to have rowed back on its commitments."

We spoke to Bond, a charity that organised the letter, which told us that this claim is based on the absolute spending on aid by each country. It also cited a research article from January, which says that at least four other G7 countries (France, Germany, Italy, Japan) plan to increase their absolute aid spending in 2021.

An increase in absolute spending is also not necessarily an increase in a country’s share of income, if a country earns more in 2021 than it did in 2020.

In short, there doesn’t seem to be enough evidence to support Mr MIliband’s or Mr Blackford’s comments, although it is plausible that they will turn out to be true when the evidence arrives.