Is the UK the world's 5th or 9th largest economy?

This article first appeared on the House of Commons Library blog, and has been updated here.

The UK has one of the largest economies in the world. But how big? Some say it is the 5th biggest; others say it is the 9th. Which is right? The answer is both. Here’s why.

How to create a league table of world’s biggest economies

When people talk about the size of an economy, they are usually referring to GDP: the total value of goods and services produced in a country. To be able to compare GDP internationally, you need to convert the value of GDP from local currencies into a common currency, which is usually the US$. The UK’s GDP in 2016 was £1, 940 billion. What was it in US$?

An obvious way to convert this is to use market exchange rates—like those you use when going on holiday—to convert local currencies into dollars. Using this method, the size of the UK economy in 2016 was $2,629 billion (all the data in this article is from the International Monetary Fund). Doing the same for the rest of the world allows us to rank the size of all economies. This league table is shown below, with the UK the world’s 5th biggest economy on this measure, just ahead of France but behind Germany, Japan, China and the US. 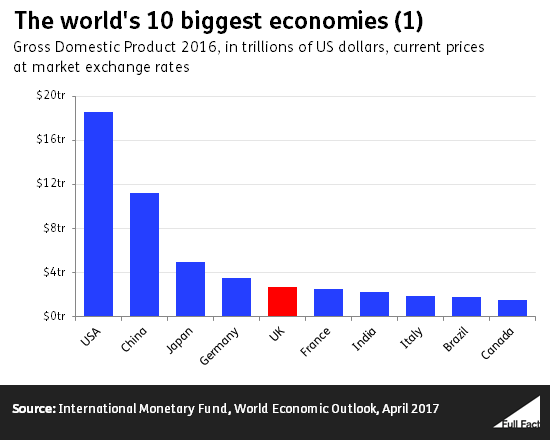 As you will have gathered by now, that’s not the end of the story. There is another approach to compare international rankings. Instead of using market exchange rates, local currencies are converted into US$ using the concept of purchasing power parity (PPP). PPP takes account of differences in price levels—and therefore purchasing power—in different countries. For example, it reflects the fact that $100 can buy you more goods and services in Kenya than in the US.

A massive study coordinated by the World Bank called the International Comparison Program calculated differences in price levels in almost 200 economies in 2011. This was then used to calculate PPP exchange rates between local currencies and the US$. These PPP rates, in theory, would ensure that you could buy the same amount of goods and services in all countries for the original $100.

Using PPP exchange rates, the UK is the world’s 9th largest economy, with India, Russia, Brazil and Indonesia now also ahead of the UK. This is because many developing countries’ GDP are a lot higher in PPP terms than under market exchange rates because of the lower price levels in their economies. For instance, India’s GDP in US$ is almost 4 times bigger using PPP instead of market exchange rates. On this measure, China is the world’s largest economy – 15% larger than the US in 2016. 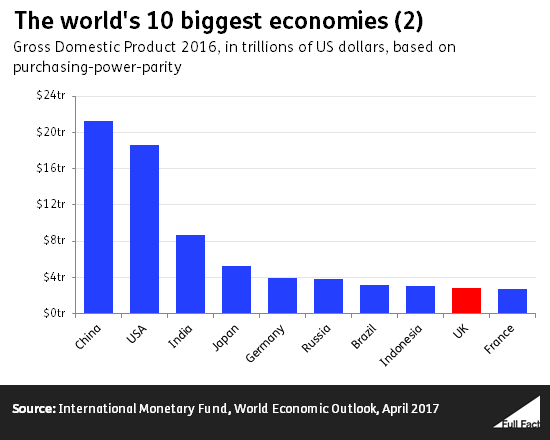 Advantages and disadvantages of each measure

Market exchange rates make for easy and transparent conversion, and are easily understood. However, it can lead to volatility in GDP measured in US$ due to short-term exchange rate movements (rather than from economic growth). A clear example of this effect is the fall in the value of sterling that followed the UK vote to leave the EU. As a result, in US$ at current market prices, the UK’s GDP is forecast to be 13% lower in 2017 than it was in 2015.

The purchasing power parity method is more stable than market exchange rates so you don’t get these volatile changes in GDP measured in US$ . The survey from which the most-widely used PPP figures are derived is only conducted periodically (in the last 20 years, there were two: 2005 and 2011) and is a massive undertaking. Even so, as PPPs are estimated there may be sampling errors—for example, these could arise when deciding which goods and services to collect prices for—and potential errors from the assumptions and methodology used in calculating them. The World Bank advises that comparisons between countries are likely to contain fewer errors if the economies are similar, like the UK and France, rather than disparate, like the US and Zambia.

Which measure is better?

Sometimes it will be better to use one method over the other. For instance, if you are looking to compare living standards in different countries it makes sense to use PPPs in order to better reflect differences in how much people can buy in different countries. Also, as the PPP measure is more stable, it is generally regarded as better if you are looking at changes in ranking over time. If instead, you are comparing flows of money, like foreign investments, you should use market exchange rates.

For comparisons of GDP and GDP growth, both of these methods are widely used. The World Bank uses market exchange rates when calculating world GDP, while the IMF uses PPP. So whether the UK is 5th or 9th largest economy in the world is in the eye of the beholder.

The House of Commons Library provides independent and impartial information to MPs, as well as publishing briefings online on legislation and topical issues. It blogs at Second Reading and you can follow it @commonslibrary for up to date facts and analysis.

By Daniel Harari, House of Commons Library
Share this:Facebook Twitter
We aim for our fact checks to be as accurate and up-to-date as possible. If you think we've made an error or missed some relevant information, please email team@fullfact.org.