Universal Credit isn’t the reason there are 1,000 more people a day in work

Universal Credit is working because over 3.3 million more people are in work since 2010.

This is a misleading link to draw. There are 3.3 million more people in work since 2010, but there is no clear evidence on how many people Universal Credit has got into work.

“We know that [Universal Credit] is working and getting people into work because our employment figures that came out yesterday show over 3.3 million more people in work since 2010.”

"What we've done is look at the whole benefit system, how do we get people into work, 1,000 people each and every day. Those people will be on less benefit by the sheer nature that they’re now in work."

Ms McVey, the Secretary of State for Work and Pensions, has repeatedly linked welfare policies introduced under the Conservative and coalition governments since 2010 to there being 3 million more people in work. This is a misleading link to draw.

The total number of people aged sixteen or over and in employment increased by 3.3 million between February-April 2010 (just before the coalition government took office) and June-August 2018 in the UK. But the increase in the total population aged sixteen or over was similar: 3 million. In short, having record numbers of people in work doesn’t sound as impressive when you consider there are record numbers of people.

There are separate figures which do show employment has increased significantly under the coalition and Conservative governments: the percentage of 16-64 year-olds in employment has risen from 70% to 76% since 2010.

However, there is not enough evidence available to know how strong the link is between welfare policies and employment.

More people in work is normal

Ms McVey’s claim that 1,000 people a day have gone into work since 2010 is based on the increase in the total number of people in work. There were just under 3.3 million more people aged sixteen or over in work in June-August 2018 in the UK, compared to February-April 2010 (just before the coalition government came into office). That works out at around 1,000 more people in work every day.

But it cannot be said that all of that increase is down to government welfare changes.

A first main reason is that the number of people in work tends to naturally rise over time, and this will account for some of the increase. 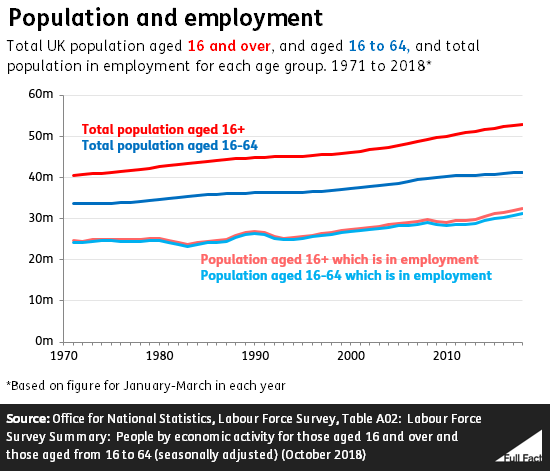 From February-April 2010 to June-August 2018, the UK population aged sixteen and over increased by 3 million. That increase is only slightly lower (300,000 people fewer) than the increase in the number of people of that age who are in employment.

Using different figures, there is evidence that this government has been successful at getting more people into work.

The “employment rate” is a better way of assessing the government’s record on increasing employment. It tells us what percentage of the population is in work, rather than the total number.

The employment rate among those aged 16-64 has increased under the coalition and Conservative governments, rising from 70% in February-April 2010 to 76% in June-August 2018. The Institute for Fiscal Studies has called the rising employment rate “remarkable”, in the context of wider economic performance in the decade since the financial crash. 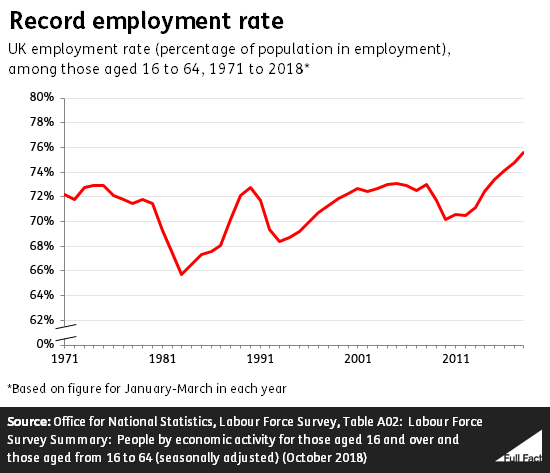 But despite this rise, there is a second key problem with claiming that changing employment figures are down to welfare changes: we don’t have clear evidence for it.

Universal Credit is the benchmark welfare policy of the Conservative and coalition governments since 2010, and Ms McVey has sometimes used it to mean “welfare reforms” in making the 1,000 people a day claim.

The government argues that Universal Credit increases employment by making work more financially attractive than under previous benefits, has conditions which encourage benefit claimants to search for work, and has a smoother administrative process for claimants moving into work.

If Ms McVey does mean Universal Credit when she says welfare reforms, then it certainly can’t have driven all the change in employment levels since 2010, as it was only introduced in 2013, and is still not in place across the whole of the UK.

However, the National Audit Office says that, because of limitations in the methodology behind the government’s calculations, “the Department will never be able to measure whether Universal Credit actually leads to 200,000 more people in work”. They have also expressed “significant doubt” about the main benefits of Universal Credit. You can read our fuller assessment of that claim here.

The bottom line is that we can’t say with any precision what is driving changes in employment and unemployment rates.

The first graph in this article was originally missing a zero after each figure on the y axis. This has now been amended.