91% of lone parents are women.

Correct, 90% of single parents with dependent children were women in 2017 in the UK.

The new conditionality requirements for lone parents under Universal Credit will have a hugely disproportionate impact on women.

Since April 2017, the “lead parent” of a child has been required to work, or be looking for work, for up to 16 hours a week once the child turns three. Some research suggests this could be more challenging for single parents—the vast majority of whom are women.

“91% of lone parents are women. Does [the Minister of State for Disabled People, Health and Work] agree that the new conditionality requirements for lone parents under universal credit will have a hugely disproportionate impact on women?”

Since April 2017, parents receiving Universal Credit have been required to start looking for work once their youngest child turns three. Previously, it was when the child turned five.

This requirement only applies to a child’s designated “lead parent”. This means that, in a two-parent household in receipt of Universal Credit, the non-lead parent is expected to find work regardless of the child’s age.

There is some evidence that the challenges in finding work “can be more acute” for single parents. Three-year olds are not eligible to attend primary school, and single parents are therefore likely to be responsible for all the logistics of arranging childcare, alongside looking for work.

According to data for the UK from 2014, 91% of single parents with dependent children were women. It was still around this level in 2017.

What are the Universal Credit conditionality requirements?

Universal Credit is a working-age benefit that is replacing a lot of existing social security benefits like income-based Jobseeker’s Allowance and Housing Benefit. The government started rolling it out in 2013, and it is expected to be fully in place across the country by 2022.

For most claimants, their receipt of Universal Credit is conditional on meeting certain requirements. These largely relate to looking for work, or increasing your income from work.

There are also specific conditions for families with children. All children have a nominated “lead carer”, and the age of the child affects what the lead carer has to do in order to receive Universal Credit.

Once the child turns two, the lead carer has to “take active steps to prepare for work”, “which might include some training and work preparation activities”.

The expectation that parents of three- and four-year olds look for work was introduced in April 2017. It was described by the charity Gingerbread (which works with single parent families) as “a significant change in that it is the first time that parents of pre-school aged children must look for work or risk being exposed to sanctions”.

The age at which a child’s parent must find work if they are on various benefits has been decreasing: from 16 years old in 2008 to five years old by 2012.

Why focus on single parents?

In a two-parent household, the conditionality requirements based on the child’s age only apply to the “lead carer”. The other parent is expected to find work regardless of the child’s age.

Gingerbread argues that the challenges in finding work “can be more acute” for single parents, as they are likely to be responsible for all the logistics of dropping off and picking up a child from childcare, and childcare costs will take up a greater part of their income. Children in single-parent households are also around twice as likely to be in poverty as those in households with more than one adult, according to the Institute for Fiscal Studies (IFS).

Parents of three- and four-year olds in England are normally entitled to between 15 and 30 hours of free childcare a week, depending on their circumstances, although the policy, introduced last September, has been criticised for involving extra costs for some parents.

Ms Crawley is referring to figures from 2014 published by the Office for National Statistics. In 2017, 90% of single parents with dependent children in the UK were women.

21% of dependent children lived in single parent families in the UK in 2017—virtually the same level as two decades before. 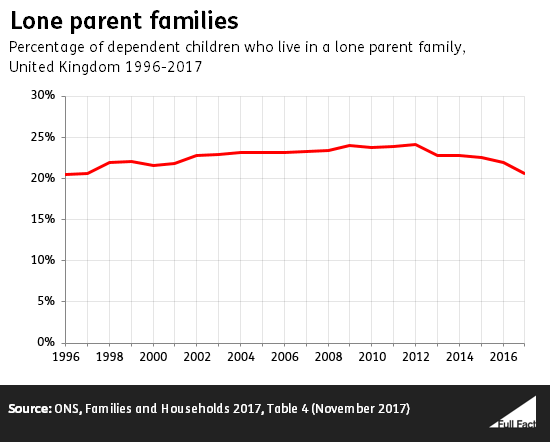 The Women’s Budget Group, an independent network of researchers, policy experts and campaigners, has previously identified other ways in which women could be negatively affected by Universal Credit. For instance, it says that the practice of Universal Credit being a single monthly payment given to a couple could give abusive partners more opportunity to exert financial control over their partners.