Is wage growth at the same level as during the Napoleonic wars?

The UK is going through the biggest squeeze on its living standards since the Napoleonic Wars.

Wage growth between 2010 and 2020 will be the lowest it’s been over any ten year period in peacetime since the Napoleonic Wars. Experts say it was lower around both the First and Second World Wars. There’s more than one way to measure living standards too.

They've [the government] said that they will fix the economy. Actually, they've tanked it so badly that we're going for the biggest squeeze on our living standards since the Napoleonic Wars.

Wage growth between 2010 and 2020 will be the lowest it’s been over any ten year period in peacetime since the Napoleonic Wars. Experts say it was lower around both the First and Second World Wars.

There's no single measure of living standards. Different measures look at different groups of people, different income sources and adjust for inflation in different ways. Looking at what’s happened to wages is just one way of measuring it and doesn’t always give us the full picture. For example, people can sustain their living standards after a fall in income if they run down their savings.

This seems to be based on a claim made by the think tank the Resolution Foundation back in March. It said that “Britain is set for a return to falling real pay later this year, with this decade now set to be the worst for pay growth since the Napoleonic wars [from around 1803 until 1815].”

Following the government’s budget in March both the Resolution Foundation and the Institute for Fiscal Studies concluded that wages in 2022 won’t be any higher than they were before the financial crisis in 2007, based on current forecasts.

The analysis by the Resolution Foundation is based on forecasts for wage growth and inflation in the next five years from the Office for Budget Responsibility. This is combined with figures from the Office for National Statistics and the Bank of England on how earnings have grown in real terms over the past 210 years.

The Foundation found that “we are on course for average pay across the decade to 2020 to be lower than the average for the decade before. That would represent the worst decade for real earnings growth in 210 years.” 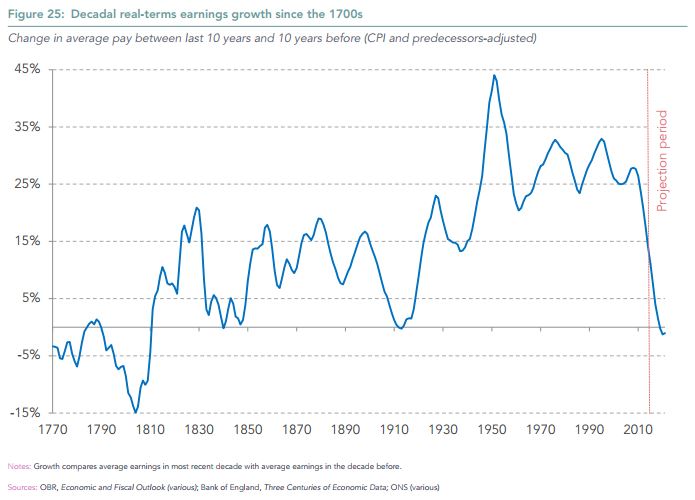 BBC Reality Check have also looked at a similar claim. They spoke to a visiting professor in the London School of Economics’ department of economic history, Greg Clark, who said the claim was correct if you look at whole decades like the 1970s or 80s. But if you look at any ten year period then real wages declined more between 1907 and 1917, and between 1935 and 1945. Right around the time of the First and Second World Wars.

So looked at that way, the current period of wage growth is the lowest in peacetime since the Napoleonic Wars.

Overall average wages have largely increased since the early 1800s, once you take inflation into account, with a noticeable decline over the last ten years.

The historical figures for earnings published by the Bank of England aren’t National Statistics—with the level of scrutiny and accuracy given to the more recent figures published by the UK Statistics Authority. The Bank describes them as “best endeavours”, mainly for use by academics.