Q. What is unemployment?

A. To be classed as unemployed you have to be out of work and actively seeking work.

Q. How is unemployment measured in the UK?

A. Unemployment is measured by a survey of 100,000 adults aged 16 and over in 40,000 households in the UK. The survey uses a random sample of addresses.

The Office for National Statistics (ONS) then uses the survey results to estimate the total number of people who are unemployed across the UK.

This is separate to the claimant count which measures the number of people claiming benefits because they are out of work. It includes people who are on Jobseeker's Allowance and people who are claiming Universal Credit and required to look for work.

Q. How many people are unemployed in the UK?

A. 1.4 million adults were unemployed in the UK between May and July 2018 (the latest figure).

Q. What is the unemployment rate? 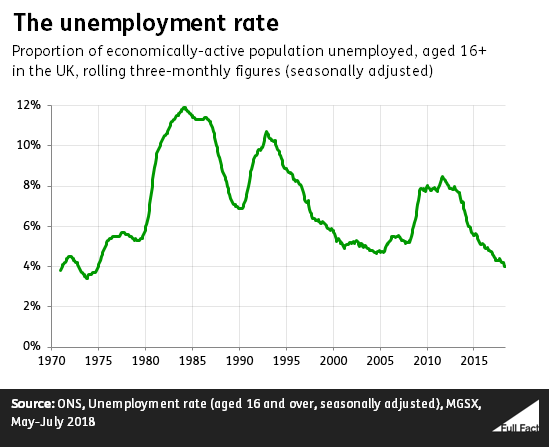 Q. What is the youth unemployment rate?

Q. What is structural unemployment?

A. Structural unemployment is unemployment based on significant changes to the environment businesses work in—for example a change in technology, or government policy—rather than just the ups and downs of the economy.

For example it could be caused by technology changing more quickly than people can learn the skills they need for new industries. As a result, some people become unemployed or struggle to find work because fewer jobs require the skills they have. For example, think of how quickly personal computers have made typewriting jobs redundant.

A. Cyclical unemployment is related to the health of the economy. When the economy is not doing well businesses lose money and lay off people to try and reduce their costs. And so unemployment goes up.

When the economy recovers businesses hire more people to keep up with increased demand for their products and services. And so unemployment goes down.

We previously said the Labour Force Survey asks a carefully selected group of people for its sample. This was incorrect, and we've now made clear it uses a random sample.