There are 1.9 million more children studying in good or outstanding schools since 2010.

Correct, comparing Ofsted ratings between 2010 and 2017. This progress has been influenced by Ofsted’s changing inspection practices—which refined what was expected of schools and placed a greater emphasis on inspecting schools which fell below this expectation.

“Under Conservative-led governments there are 1.9 million more children studying in good or outstanding schools.”

This is correct. The improvement, since 2010, has been influenced by Ofsted’s changing inspection practices.

Schools aren’t all consistently improving—Ofsted has recently pointed to a “small but persistent group of underperforming schools that have not improved enough over very many years”.

There were 1.9 million more pupils in schools in England rated good or outstanding as of August 2017 compared to August 2010. These are the two highest ratings schools can be given from Ofsted, schools that don’t meet this standard are rated as requiring improvement or inadequate.

The total number of pupils has increased every year since 2009, so we need to look at the proportion of pupils across England who are in these schools too. This has also increased from 66% of pupils in August 2010 to 88% in August 2017.

The proportions are similar looking at school numbers: 68% of schools were judged good or outstanding in 2010, compared to 89% in 2017. 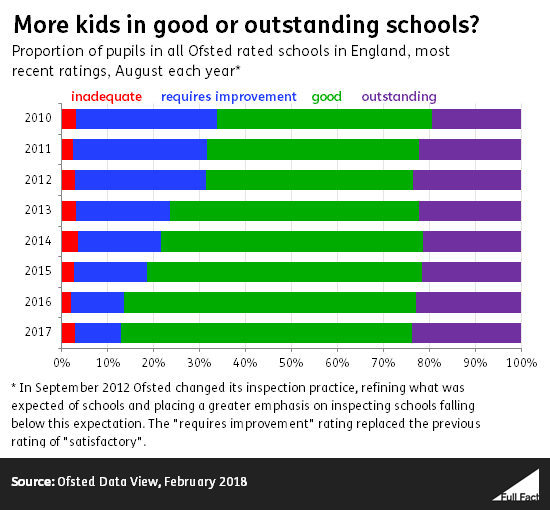 This improvement partly comes from Ofsted changing its inspection practices

In 2012 the “satisfactory” rating became “requires improvement”, and Ofsted prioritised schools previously judged satisfactory for re-inspection in 2012/13 and 2013/14. It noted that the 'requires improvement' judgement had acted as a "sharp catalyst for more rapid intervention" among schools and local authorities.

By 2016, the majority of secondary schools that were rated satisfactory had become good or outstanding.

These figures exclude the ratings of some low performing schools that have closed and then re-opened as sponsor-led academies. Ofsted’s statistics only count these schools once the new sponsor-led academy has been inspected.

Ofsted recently consulted on changes to its statistics because it says “not including these schools in the statistics affects the national grade profile because, in effect, the stronger schools tend to remain in the dataset when they become an academy while the weaker ones drop out”.

For August 2017, Ofsted calculated that including the ratings of the predecessor schools would mean the proportion of schools rated good or outstanding would decrease by 2 percentage points, so falling to 87% of schools in August 2017.

We added more detail to the conclusion and the graph about Ofsted's changing inspection practices.