Are more than 1.5 million children in underperforming schools?

"Under Michael Gove schools are being left to 'sink or swim' - more than 1.5m children are in underperforming schools".

The Shadow Education Secretary Tristram Hunt MP yesterday claimed Labour's new plans to introduce local oversight of schools would improve school performance. This follows the publication of a review on the topic by David Blunkett MP, former Secretary of State for Education and Employment under Tony Blair's government.

Data from Ofsted for December 2013 confirms 1.8 million children are in schools rated as satisfactory (re-labelled in 2012 as 'requires improvement' but labelled as 'satisfactory' in the data) or inadequate.

But looking back over the past five years, the number of schools underperforming - and so the number of pupils attending such schools - has been decreasing.

Over a million in under-performing schools, but recent improvements

On the 31st August 2013, there were 1.75 million learners or spaces in schools rated satisfactory/requires improvement or inadequate - a number which by 31st December 2013 had decreased to 1.67 million. 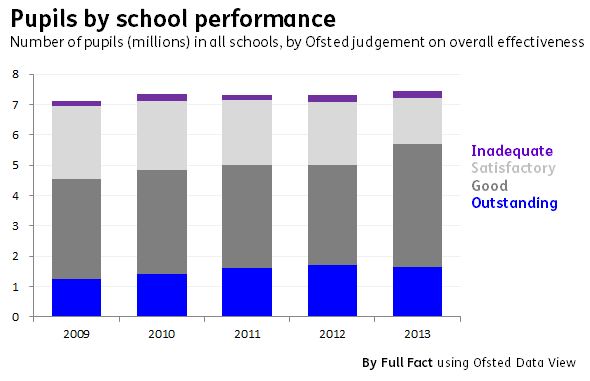 The biggest decrease has been in the numbers of those rated satisfactory/requires improvement, from 7,000 schools in 2009 to about 4,000 in 2013. That's a decrease from 2.4 million learners to 1.5 million.

Ofsted told us there was a particularly noticeable reduction in under-performing schools in the 2012/13 academic year, when their inspection framework changed so that schools previously judged to be 'satisfactory' are now judged as 'requiring improvement'. Their annual report said the change in the label seemed to have provided a catalyst for more rapid intervention.

They also note that a high proportion of previously satisfactory schools were inspected in 2012/13, many of which improved.

These figures include nursery schools, pupil referral units and special educational needs schools, but excludes independent schools (inspected under a different framework and not always by Ofsted).

Majority of free schools have not yet been inspected

Still, Ofsted are yet to inspect the majority of free schools (there are currently 174)- since schools are generally not inspected until they have been open for 18 months - which also means many of the newer sponsor-led academies are excluded from the figures.

But only 4% of open schools had not been inspected by 31 December 2013. Ofsted told us about 3/4 of these are sponsor-led academies, which generally perform worse than schools as a whole since they normally replace previously underperforming schools. As a result, they told us there is likely to be a small bias towards a higher proportion of pupils being in weaker schools as a result, but that it was unlikely to skew the figures substantially.