Are more children being taken from their families?

The state is removing more children from their families than at any time since the 1980s.

This is correct as far as available figures show. More children are becoming ‘looked after’ by a local authority than at any time since the mid-1980s, and increasing numbers are being adopted or placed with a special guardian. These figures don’t perfectly reflect the numbers of children who are away from their original parents.

We don’t know exactly how many children are separated from their parents in England, but it’s clear from available figures that this is likely to be happening to record numbers since the 1980s.

Neither set of figures gives us the full picture: not all children who are in the care of a local authority are actually away from their parents, and not all children who’ve been adopted or placed with another guardian will remain in that situation, as some placements can fall through.

In spite of those drawbacks, they still show a clear trend of increasing numbers of children entering the care system, in the care system and being placed with new families.

The number of children being “looked after” by their local authority in England is at its highest point since 1984. Published figures we found only go back to 1994, but the Department for Education showed us figures going back to 1966.

Back in 2015, the Department for Education said: “The number of looked after children [in England] has increased steadily over the past seven years and it is now higher than at any point since 1985.” 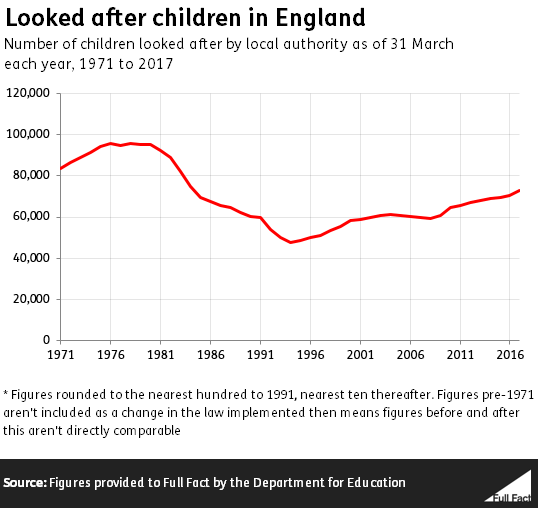 We can also take into account population changes when looking at the increase in the number of children being looked after. In 2013 there were 60 children per 10,000 under the age of 18 being looked after, this stayed the same until 2017 when it increased to 62.

‘Looked after’ can mean a variety of things

The definition of being “looked after” is wider than it might sound. Looked after children can include those who are fostered, placed in secure units, children’s homes, or live independently. They can be placed for adoption too, and some are placed with their parents, but with extra supervision from social services.

Around three-quarters of children being looked after were in a foster placement in the year ending March 2017. Being fostered can also include placements with relatives or family friends.

Children also leave the care system for a variety of reasons.

The number of children who’ve been adopted or placed with a special guardian is likely to be growing, and increasing numbers each year are being placed in this way.

SGOs appoint one or more people who aren’t the child’s parents to become their special guardian. They are legally secure placements which are meant to be permanent, giving guardians parental responsibility but not severing ties between the child and their birth parents in the way adoption can. They came into force late in 2005.

If you add together the number of looked after children who stopped being looked after because they were adopted or subjected to an SGO, the figure has more than doubled in roughly the last decade. It went from 3,800 in 2006 to 8,000 in 2017, thanks to an increase in SGOs.

Analysis from Community Care shows the numbers being placed on adoption or special guardianship combined much higher in recent years than in the 1990s.

Other children leave the care system and return home

The biggest single reason children leave the care system is to return home to live with parents, relatives, or another person with or without parental responsibility. This accounted for about a third of leavers. 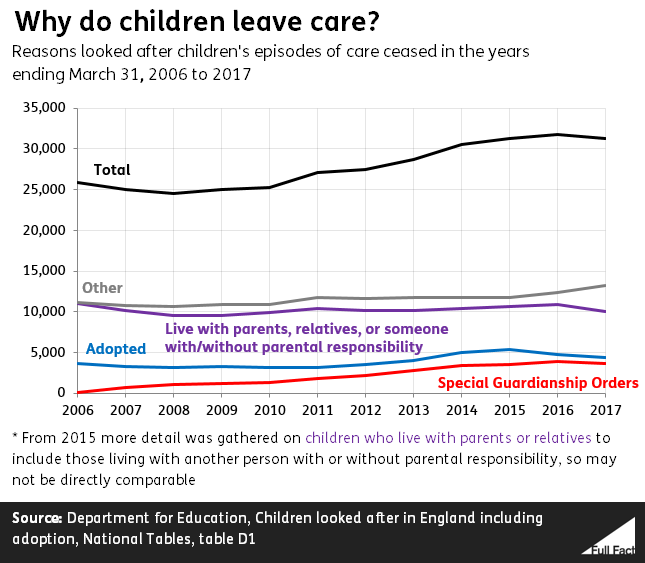 17% of children who stopped being looked after in 2017 did so for “any other reason”. According to the Department of Education the majority in that category left care on their 18th birthday. Other reasons for leaving care included moving into independent living with supportive accommodation or being subject to resident or child arrangement orders.

Children in foster placements count as being looked after by the local authority, so are not included here.

What’s behind the increase in looked after children?

Several possible factors that could have contributed to the increase have been proposed.

A local authority might apply for a care order from a court if there are concerns about a child’s welfare. An officer from the Children and Family Court Advisory and Support Service (Cafcass) represents children in family court proceedings.

The tragic death in 2007 of 17 month-old Peter Connelly, known as Baby P, made headlines a year later after his mother, her boyfriend, and his brother were found to have caused or allowed his death.

The year after Baby P’s death, a Serious Case Review into what happened was published. Cafcass found that in the direct aftermath of this review, care applications over the following 20 days went up 37% compared to the proceeding 20 days, and were 23% higher than the same period a year before.

In 2012 a committee of MPs said this was likely to be the single most important factor behind the increase in the number of children being looked after since then. But it also said that there had already been an increase since July of that year, before the Serious Case Review was published.

It also said the increase may have been down to new guidance issued in 2010 that meant local authorities also had to start providing accommodation to 16 and 17 year-olds who are homeless or require accommodation.

According to figures provided to us by Cafcass, the number of care applications more than doubled between in the decade up to 2016/17.

We've updated this article with more information from the Department for Education.

We added a section on the reasons children stopped being looked after, including adoption, special guardianship orders, and returning home to relatives, parents, and people with or without parental responsibility.

Following feedback about an earlier version of this article, we’ve changed our conclusion and the structure of the piece. The conclusion previously stated there were record numbers of children being looked after by a local authority since the mid-1980s, but that not all of these will have been away from their parents. We’ve expanded this to address children who leave the care system to guardians or adoptive parents, and made clear that the main claim is correct as far as available figures show.