Are more working class students dropping out of university?

Record levels of working class students are leaving university before completing their degree.

The proportion of young UK students from disadvantaged areas dropping out of higher education in England by their second year is at its highest level for five years, but it’s not a record high. That’s looking at full-time students on their first degree, and is based on educational disadvantage. Disadvantaged students, including working class students, are generally more likely to drop out than advantaged.

“Many working class and part time and older mature students are actually leaving university… there’s record levels of students that are actually having to leave university before they finish their qualifications, and I think that’s because of the government’s policies.”

The proportion of young students from disadvantaged areas leaving higher education in England after their first year is at its highest level in five years, but isn’t the highest ever recorded.

Across the UK, and in England where the UK government controls education policy, the proportion of students dropping out a year into their first full-time degree increased slightly over the last two years. Over time it has remained steady or generally decreased depending on which type of students you look at.

HESA told us that it doesn’t publish any data on why students are choosing to continue or not with their courses.

Aside from students from the most advantaged areas, the proportion of UK students leaving higher education in England before their second year of study has increased over the last two years according to the Higher Education Funding Council for England (HEFCE). Ms Rayner’s office pointed us towards a report by the Office for Fair Access which used these HEFCE figures.

In comparison the drop-out rate for students from the fifth most advantaged areas stayed relatively stable at 4.9%.

The gap between students from the most and least advantaged areas has also widened since 2012/13. 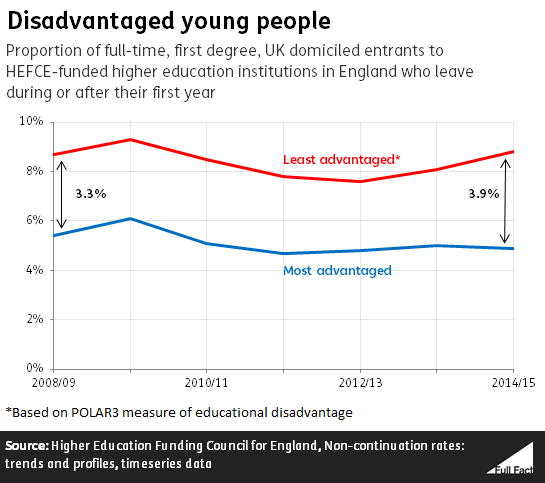 Students who drop out in later years aren’t measured in these statistics, which we’ll discuss later on.

As well as the figures above, Ms Rayner’s office pointed us to a separate report which looked at the link between the proportion of students at a university whose parents had “lower-level” jobs and the rate at which that university’s students didn’t complete their degree, and found that students from lower socio-economic backgrounds were more likely to drop out.

This report didn’t look at trends over time.

“Non-continuation rates among young, full-time first degree students [in the UK] has remained relatively steady over time with a more downward trajectory observed for mature entrants”, according to the Higher Education Statistics Authority (HESA) which publishes the figures.

The proportion of students under the age of 21 not continuing in higher education in the UK in their second year of study was 6.2% in 2014/15.

It was highest for students at universities in Scotland (6.5%) and lowest in Northern Ireland (5.3%). 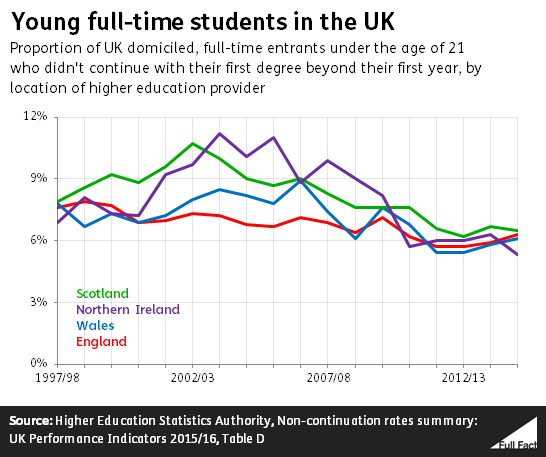 New mature students are more likely to drop out of full-time degrees, but fewer have been

The proportion of mature students (those over the age of 21) not continuing with higher education after the first year of their full-time degree is generally higher than for those under the age of 21. It was 11.7% across the UK in 2014/15. 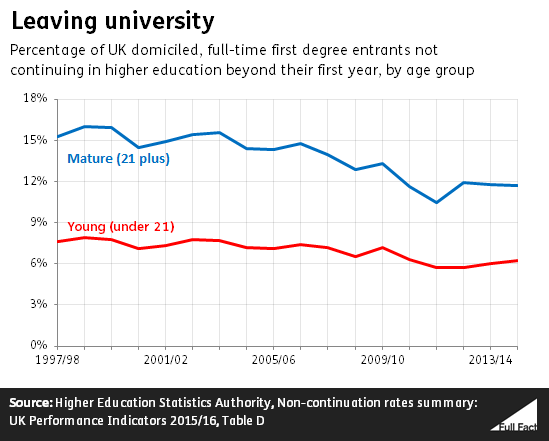 Across the UK the proportion of mature students not continuing beyond the first year of their first degree has changed most considerably in Northern Ireland. 2011/12 saw the lowest drop-out rate in Northern Ireland at 7.3%, but it has since returned to 15% in 2014/15—the highest on record, and closer to the levels seen in 1997/98.

Overall the individual countries of the UK have seen the drop-out rate among mature students generally decreasing since 1997/98, though they have levelled off or increased in the last few years.

Looking at students starting university again (as in, those not first time entrants), younger students are slightly more likely to drop out. Both proportions have generally been declining over the last 20 years.

The proportion of part-time students who don’t continue with their first degree beyond the second year of study has fluctuated in the under 30 age group, and stayed roughly similar for the over 30 age group. 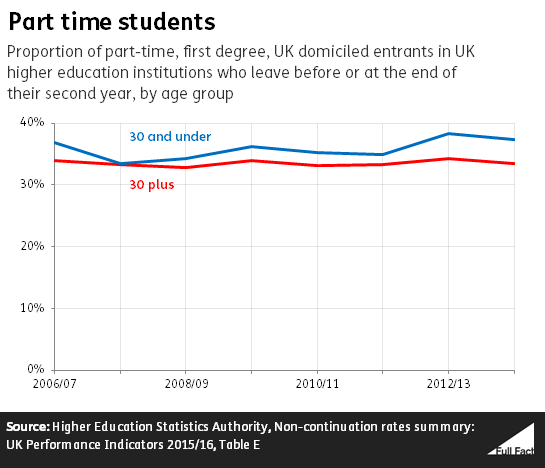 Projections on continuing with higher education show a similar trend

This means we can have a rough idea of the full ‘drop-out’ rate—taking account of students leaving in their second, third, or later years of study.

It projects that for those starting in 2014/15 10.3% across the UK will leave without a qualification or a transfer. This proportion has remained relatively similar over the last three years and has been generally declining over the last 20 years.

A similar trend can generally be seen across all the individual countries of the UK.