"At present, it is a sad fact that 33% of children arrive at school without the requisite communication and language skills to take part in school education."

Education Secretary Michael Gove caused a stir earlier this week when he suggested that school pupils might benefit from more time in the classroom. However it appears that he and his colleagues at the Department for Education aren't just eyeing changes within the school gates.

Yesterday in the House of Commons, Liz Truss, the Education and Childcare Minister told MPs that it was a "sad fact" that a third of children began school without the language and communication skills needed to participate in a school education.

The Daily Mail picked up the story, claiming that "A third of pupils 'can hardly communicate' when they start school."

So what does this mean, and is it accurate?

We contacted the Department for Education (DfE) for a source for the claim, and are waiting for a response.

However both the Communication Trust and Ofsted have recently reported a similar finding, that:

"34% of children are not working securely in communication, language and literacy by the end of the Early Years Foundation Stage."

This figure is based upon DfE data on the proportion of five-year-olds able to carry out certain communication and language skills, known as Early Years Foundation Stage Profile Attainment.

What does it mean?

The Early Years Foundation Stage profiles assess the abilities of those children entering primary education (which becomes compulsory after a child turns five) against nine benchmarks in a number of different areas.

One of the areas tested is 'communication, language and literacy', where a child is required to display skills such as "showing an interest in books" and "using language to imagine and recreate roles and experiences." A full breakdown of the different assessment scales is set out here, although it is currently under review by the Government.

Based on the number of skills a child is exhibiting, they are placed within one of the following categories:

However the DfE also records the proportion of children working securely within this assessment scale, defined as those meeting 6 or more of the assessed skills. 34% of five-year-olds are achieving fewer than six of these skills in the four areas that come under the communication, language and literacy heading.

It's worth noting that the proportion of children falling short of this goal has been steadily declining over recent years, as the graph below shows:

Are these children unable to take part in a school education?

This data doesn't conclusively show that children not "working securely" within the early years goals don't have the requisite skills to participate in education once they begin at school, but there is strong evidence to suggest that those performing well in the assessments go on to achieve more at school.

The DfE commissioned research in 2010 that found that there was a very strong correlation between scores in the early years assessments and success at Key Stage 1.

As chart below shows, nearly three quarters of children reaching a score of six in reading in the early years assessments go on to reach the expected Level 2 at Key Stage 1 in the same area, and the proportion increases for those scoring more than six. Similar trends are also clear for writing. 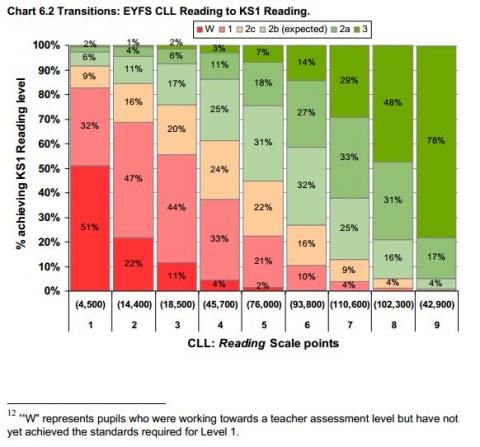 However this does also seem to call into question the extent to which it can be said that those not "working securely" with these skills at early years level are unable to participate at school. While those scoring five points in the Early Years Foundation Stage reading assessments would fall into this group, over half go on to reach the expected level in KS1.

The Department for Education has certainly found that a third of children entering primary school are not "working securely" within the commnuication and language skills expected of them as they leave the Early Years Foundation Stage.

Whether or not it is fair to conclude that these pupils are therefore unable to participate in a school education - or whether they can "hardly communicate" as the Daily Mail claims - is more dubious. While there is certainly a strong correlation between school and early years achievement, a significant proportion of those falling below the standard set to be "working securely" with communication and language do go on to meet the standards expected at Key Stage 1.