Are there record numbers of young people going to university?

There are record numbers of young people going to university, including from disadvantaged backgrounds.

Accurate based on numbers and rates of young people accepted onto full-time places at university in England. Advantaged students are still substantially more likely to go to university.

We see this and similar claims coming up again and again.

There are two different ways to look at undergraduate university entrants: the first is how many young people have been accepted for a place at university (UCAS data), the second is how many are there once they've started (government data).

UCAS data shows record numbers and rates of 18 and 19 year olds going to university in England, including those from disadvantaged areas.

The government data for first-time university attendance for 17-20 year olds isn't at a record high. But these figures are a year older than the UCAS ones (so may show a record high when they're updated), and the only year with a higher participation rate was 2011/12, when a higher proportion went to university before the increase in tuition fees a year later.

In 2015, 31% of 18 year olds in England were accepted into a university place (the entry rate)—an increase of almost one percentage point on the previous year and the highest level recorded. 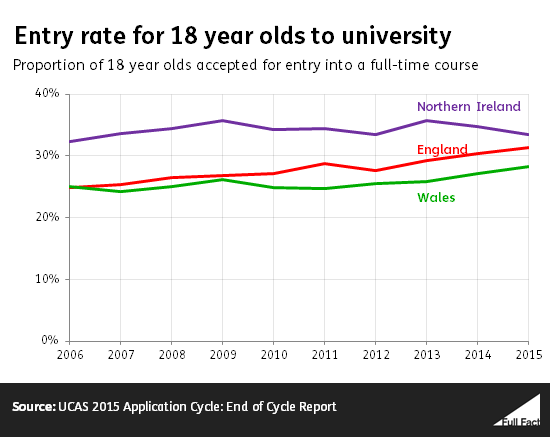 We haven't mentioned Scotland here because not all universities in Scotland use UCAS and data issues have affected comparability of the Scottish figures over time.

While around half of all acceptances to university are 18 year olds, a further fifth are 19 year olds who have applied a year later. To account for this, UCAS provides a cohort entry rate, which measures how many of those in one year group get a place at university when they're 18 or 19.  The downside of this is that we don't yet have figures for 2015 because the most recent cohort hasn't yet had the chance to apply at 19.

In 2015 the entry rate for 18 year olds living in the most disadvantaged areas was at a record high in England—around 19%—in Wales it has changed very little in comparison to 2014 and is still around 17%. But in Northern Ireland it has fallen very slightly to 16%.

The rate for those in the most advantaged areas in 2015 was at a similar level to that seen in recent years—at 45% in England, 46% in Northern Ireland and 44% in Wales. 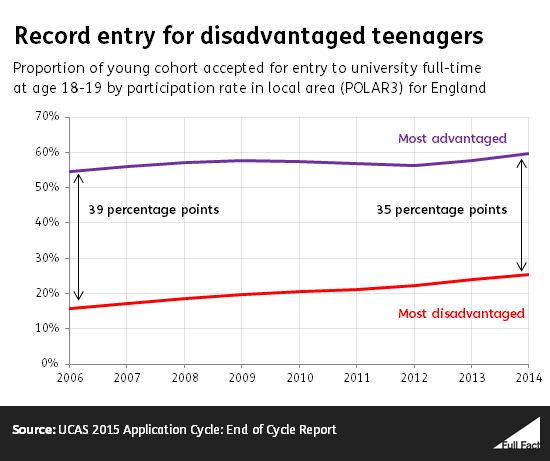 The other way to look at disadvantage is by income level, which UCAS measure by looking at whether or not a young person was receiving free school meals at age 15.

The entry rate to university of 18 year old state school pupils in receipt of free school meals was also at a record high in 2015—a figure of 16%. That's compared to 31% for those who didn’t receive free school meals.

Participation rate isn't yet at a record high

The other way of looking at how many young people are going to university is by counting them once they're there (rather than when they're accepted for a place).

The Department for Business, Innovation and Skills provides data on how many students from England who have been at university in the UK (or in a higher education course at college) for at least six months are aged 17-30 and at university for the first time. This data has the benefit of including part-timers, while the UCAS data relates only to full-time applicants.

The release states that the participation rates for 2012/13 onwards signal a return to the trend before 2011/12 of year on year increases in the rate.

We added in a sentence to explain that the participation rate seems to have returned to the trend of year-on-year increases seen before 2011/12.

We have updated this piece to include the latest UCAS figures from 2015.