Black and ethnic minority students at the University of Oxford

You are twice as likely to get into the University of Oxford as a white applicant (24%) than a black applicant (12%).

Correct, for UK undergraduate applicants between 2015 and 2017.

A quarter of Oxford colleges did not admit a single black student in a whole year group at least once between 2015 and 2017.

Correct, for undergraduate students from the UK who took up their place between 2015 and 2017.

Correct, for undergraduate students from the UK who took up their place between 2015 and 2017.

BME students make up 17.9% of all British Oxford undergraduates. That’s pretty close to the percentage of BME people among 17-24-year-olds in England and Wales – 18.3%.

Correct, for undergraduate students from the UK who took up their place in 2017, and looking at those in the 2011 census who would be between 17 and 24 today.

“You are twice as likely to get into @UniofOxford as a white applicant (24%) than a black applicant (12%). Why? 1/4 Oxford colleges did not admit a single black student in a whole year group at least once between 2015-17. 8 colleges less than 1% black. Why?”

“BME students make up 17.9% of all British Oxford undergraduates. That's pretty close to the percentage of BME people among 17-24-year-olds in England and Wales – 18.3%.”

Both David Lammy and Toby Young are both broadly correct in their claims, yet they are making contrasting points about how accessible the University of Oxford is for black and minority ethnic students.

The exact figures vary depending on which year you look at, whether you’re talking about the overall student population or applicants’ relative chances of being accepted, and also which groups in particular you are talking about.

2017 was the first year (in recent times at least) when Oxford’s UK undergraduate intake had a similar level of black and minority ethnic students to the general population of England and Wales aged 17-24, but black students are still underrepresented.

Black students who apply to Oxford are less likely to be accepted than white students, and in some colleges make up less than 1% of all students from the UK.

All figures in this article refer to applicants for undergraduate courses living in the UK.

Not all of these students will necessarily take up their place though. 12% of black students living in the UK who applied to Oxford were admitted for the year 2017/18. 23% of UK-domiciled white applicants were. Over the last three years, the average is 12% for black students and 24% for white students.

Around 6% of applicants to Oxford living in the UK didn’t declare their ethnicity from 2013 to 2017, so some students will not be included in the figures.

The University of Oxford says that that “students from BME backgrounds are more likely to apply for the most competitive courses than White students”. 41% of black students from the UK who applied to Oxford between 2015 and 2017 applied for medicine or law, which Oxford describes as “highly competitive”. In comparison around 12% of white students applied for these courses.

No college admitted more than seven black students across those three years—again that’s looking at students living in the UK.

Across the university black students made up 1.9% of all UK students admitted in 2017.

Comparing with the rest of the country

In 2016, 26% of UK students starting an undergraduate degree at all UK universities were black or minority ethnic, compared to 16% at Oxford.

Applicants to Oxford normally need to get at least three As to be offered a place. Looking at UK students who got three As (or equivalent) at A-level, 20% of students were black or minority ethnic in 2015, compared to 14% of Oxford’s UK intake that year.

Among black and minority ethnic students, certain groups are more represented than others. 1.9% of Oxford’s UK undergraduates starting in 2017 were black, and 1.7% were Bangladeshi or Pakistani. 6.5% were Asian (not including those who identified as Bangladeshi or Pakistani which Oxford provides separate figures for), and 6.6% had mixed heritage. 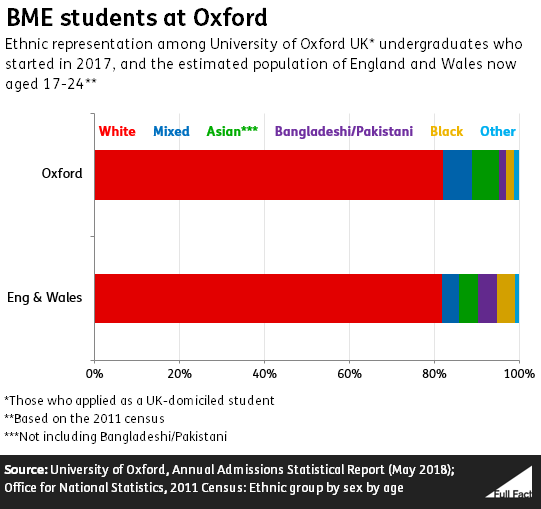 We updated this piece to add more information on the proportions of black and minority ethnic students at Oxford.