From nannies, au pairs and childminders, to play-groups and after-school clubs, there is a large range of childcare services available in the UK, provided both within the home and outside. Each service is slightly different and has different associated costs.

Parents with children up to 15 years old (or 16 if they have a disability) are entitled to various forms of government support for childcare. Much of the debate, however, centres on childcare for pre-school children aged under five, and this article focuses mainly on them.

In order for parents to be entitled to government support with childcare costs, they must use an “approved childcare” provider.

Each country has its own inspectorate for determining “approved childcare”, and the number of “free” childcare hours is determined by the devolved assemblies. This piece focuses on the situation in England.

79% of families in England with children aged 0 to 14 used some form of childcare, based on government estimates for a given term time week in 2014/15. 66% used formal childcare, and 40% used informal childcare. 28% used both. 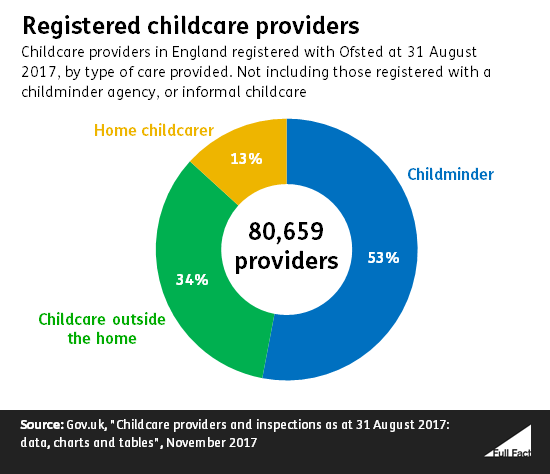 Childcare providers caring for children under five must be on the Early Years Register (EYR). At the end of March 2017, there were 65,000 providers on the EYR, providing 1.3 million places.

While this is roughly the same number of places since August 2012, the number of providers has fallen by 20%.

How much does childcare cost?

We often hear about the high costs of childcare. One recent report stated that costs had risen up to seven times faster than wages since 2008, with London based parents of one year olds at the top end of this scale (see the full factcheck here).

The full picture of childcare costs is one of significant variation across regions, family-types and age-groups.

There is no single set of figures for childcare costs in the UK. A common source is the Family and Childcare Trust’s (FCT) annual childcare costs survey. Because of the way it records data, the figures from its latest 2017 survey give an indication of costs in a rough period between 2016 and early 2017.

It estimates that the average nursery place for a two-year old in England costs about £113 a week for 25 hours, or £4.54 an hour.

In both instances, the figures are slightly higher for under-twos.

After-school clubs for children aged 5-11 cost £53 a week on average, or £68 for pick-up from school and afternoon care by a childminder.

Costs can vary a lot within the same region 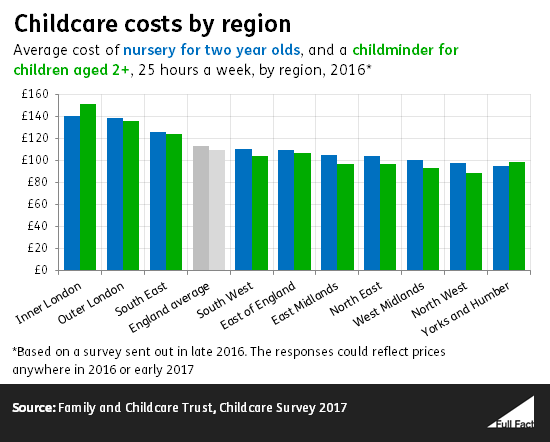 It’s much more difficult to compare costs over time.

The FCT report comments, in relation to childcare for under-twos, that “Underlying this data are price moves in both directions for different local authorities, some of significant magnitude. This appears to reflect considerable volatility in the childcare market as the sector responds to changing minimum wage and pension auto-enrolment legislation, along with upcoming policy changes related to the free entitlement.”

However, many families will not be paying the sums stated in the FCT report, either because they do not use 25 hours of childcare a week, or they get government support with costs.

The government found that in 2014/15, the median weekly amount paid by families to childcare providers was £23. At the time, 65% of families who used a formal childcare provider reported paying for it. Out of those using formal providers, they were least likely to pay for nursery classes, nursery schools, and playgroups or pre-schools, which the report says reflects the entitlement to government funding for early education of three and four year olds.

53% of parents said they found it easy or very easy to meet childcare costs. 22% found it difficult or very difficult.

If parents are in work they may be eligible for tax-free childcare and childcare vouchers.

All parents of children aged three and four are entitled to 15 hours free childcare a week (up to 38 weeks a year). Parents get another 15 hours on top of this if they earn on average the equivalent of working 16 hours a week at their relevant national minimum wage, and no more than  £100,000 a year (with some exceptions).

Parents of two year olds in receipt of certain benefits are also entitled to 15 hours free childcare a week.

The impact of government support is contested

There is some debate over how much of a difference government support is making and who benefits.

As far as we’re aware, there is still research to be done in this area.

Think tank the Resolution Foundation has identified two main questions to discuss about whether support is “being targeted where it is most needed” and what impact the support has on work incentives—the Institute for Fiscal Studies has written more about this here.

It has also raised concerns about the “the risk of undersupply of new free places” and “possible price rises to cover funding shortfalls”.

We’ve written more here about the debate over how many pledged 30-hours free childcare places have been delivered.