Counting the cost of poor literacy and numeracy skills

It's often claimed that the UK is falling behind with its literacy and numeracy skills, preventing workers and the economy from achieving full potential. 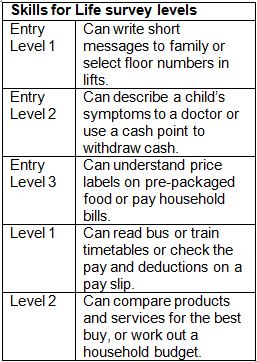 About five million working age adults in England—one in seven of the working age population—have below-functional literacy skills, according to a government survey conducted in 2011. That means they have literacy skills below the government's Level 1 measure, or in other words their skills are equivalent to the level of what's expected of pupils aged 11 and under. (The data in this article relates to England unless otherwise stated.)

Millions more have below-functional numeracy skills—an estimated 8 million adults and nearly a quarter of the working age population. That means they have numeracy skills below the Entry Level 3 measure, or in other words their skills are equivalent to the level of what's expected of nine year olds.

Level 1 is the equivalent of a GCSE grade D to G. It's the level defined in the Leitch review of skills as 'the level needed to get by in life and work'.

Whether or not we should be comparing these levels, which judge the proficiency of adults, to what's expected from primary school children has been questioned. Research body The National Research and Development Centre for Adult Literacy and Numeracy at the Institute of Education has said:

"When we consider that the vast majority of these adults are employed and have been so for many years, own or rent their own homes, pay their bills, do the shopping and otherwise run their households, it would be inaccurate and indeed unfair to argue that their competency with numbers was that of a young child."

UK adults are less skilled in numeracy than their international counterparts

England and Northern Ireland have one of the lowest levels of numeracy skills when compared to other OECD countries. 24% scored at or below the OECD's basic level of numeracy skills in tests conducted for its report on the 2013 skills outlook (confusingly, their basic level refers to a different Level 1 to the one above).

The average across the 22 participating OECD countries and regions (including Flanders in Belgium) was 19%. 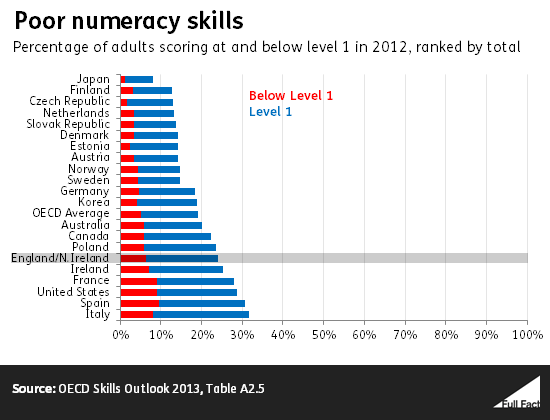 Performance in literacy was about average—with 16.4% of adults in England and Northern Ireland (referred to as the UK by the OECD) scoring at the basic level, slightly worse than the average of 15.5%. 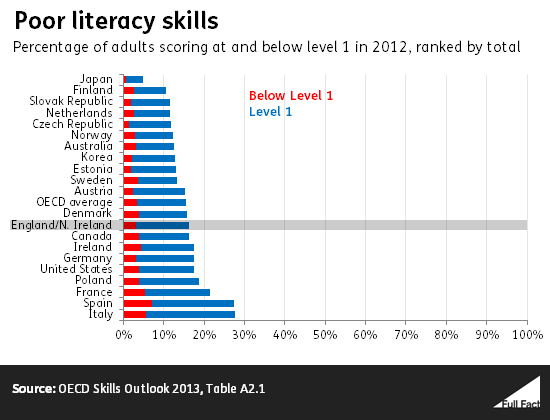 If you live in England and Northern Ireland, it's more likely that your social background will influence your literacy performance too, according to the report. Particularly so among young people.

But the news isn't all glum. The OECD research also found that England and Northern Ireland make greater use of their highly skilled talent pool than other countries. Only 13% of adults with Level 4 or 5 literacy skills were out of the labour force, less than the average of 17% across participating countries.

There's been a slight fall in the proportion of workplaces that feel they aren't quite getting the skills they need from their workforce, according to surveys by the UK Commission for Employment and Skills in 2011 and 2013. But where businesses are struggling to find the skills they need when recruiting, more of them are reporting a lack of oral and written communication, literacy and numeracy skills as the cause.

Perhaps unsurprisingly then, Jobseeker's Allowance claimants in particular tend to achieve lower scores than average for literacy and numeracy, according to the 2011 Skills for Life survey. The level with the biggest gap between claimants' performance and that of all adults was in performance at the higher skills levels. Just two-fifths (39%) of claimants achieved Level 2 and above in literacy compared to just under three-fifths (57%) on average for all adults in England.

Teenagers in England finish their core learning at an earlier age than other countries, narrowing the topics they study or starting on more specific training between the ages of 16 and 18. Research by the National Foundation for Educational Research has suggested that this could explain the comparatively lower literacy and numeracy performance of young people in England when compared to other high performing OECD countries.

The other factor that could influence the lower scores in England, the research said, is that England had a comparatively high proportion of young people out of work, born outside the UK and who speak another language at home compared to other high performing countries. But young people without those features also performed worse than their international peers.

The research also found that 16 to 18 year olds were significantly less likely to be in education or training than their peers in other high performing countries. But when they do start work they then have to develop these skills pretty quickly. With teenagers now having to remain in education or training until the age of 18 it is intended that the participation rate of 16 to 18 year olds in England will increase.

Since August 2014, teenagers who haven't achieved a good pass in English and/or maths GCSE (grade D and below) by the age of 16 have to continue working towards these qualifications as part of their post-16 education or training. But membership body the Association of Colleges, have argued that unless the newly-reformed English and maths GCSEs teach these skills with sufficient relevance to the workplace, the policy could be unhelpful.

Research for the charity National Numeracy suggested that poor numeracy skills cost the UK around £20 billion a year. But it's so hard to measure that the research said the range could be anywhere between £6.7 billion and £32.6 billion — or outside this range altogether. Other research by KPMG has suggested a lower figure: anywhere up to £2.4 billion a year.

We can't really say for sure that any cost to the economy, no matter what estimate we make of it, is caused precisely because of poor skills. We can only really estimate the costs of specific factors like unemployment among people with poor numeracy skills. It's very difficult to say that these people are unemployed solely because they don't have the skills.

We originally said the OECD research found only 13% of adults with Level 4 or 5 literacy skills were unemployed. The figures relate to those 'out of the labour force' so include those who are inactive too. We have updated the sentence.