This year’s GCSE results were released today. Overall, there has been a slight pick-up in performance levels, after a couple of years of decline in pupils achieving higher grades.

However, as with our assessment of last week’s A-Level results, it’s important to remember that any reported changes are likely to be much less dramatic than they sound.

A rise in, say, the number of pupils achieving top grades, is likely to be a matter of a few percentage points. Changes in performance also need to be taken in a longer term context to be properly understood, not looked at compared to last year in isolation.

Those warnings aside, there are a couple of interesting trends to note. A pick up in overall achievement of grade A/7 and above, or C/4 and above (we’ll explain the new grading system in a moment) is driven by boys in particular. They’ve shown a slight increase in achievement of these grades, while achievement among girls is much the same as in previous years.

Some of the biggest declines in performance are in Wales—which has seen a five percentage point drop in achievement of grade C/4 over the past two years.

The data analysed in this article all comes from the FFT Education Datalab, and covers England, Wales, and Northern Ireland (most students in Scotland don’t sit GCSEs).

What’s happened to the grading system?

20 subjects in England and Wales were assessed based on a new format this year. Three subjects: English, Maths, and Welsh, already made the switch last year.

The new format is mainly assessed by exam, with a reduced amount of coursework. Courses are no longer divided into modules, and students take all their exams in one period at the end of the course. It’s also designed to include “new, more demanding content”.

A new grading system has been introduced for the new format of assessment (from 9 to 1, instead of A* to G), which is designed to “allow greater differentiation between students”. Grades 7-9 are equivalent to the old A-A*, while 4-6 equates to C-B.

Ofqual—the body that regulates examinations in England—has previously said that the distribution of grades should be broadly the same under the new grading system. It uses predictions based on students’ prior attainment to ensure this.

This year has seen an increase of about half a percentage point in the level of students in England, Wales and Northern Ireland achieving grade A/7 or above, and C/4 or above. 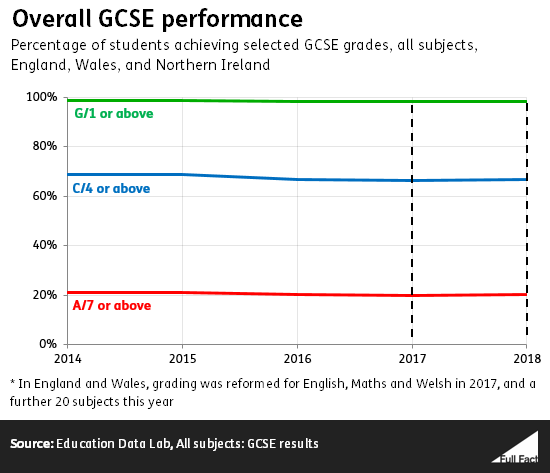 Performance among boys has picked up this year 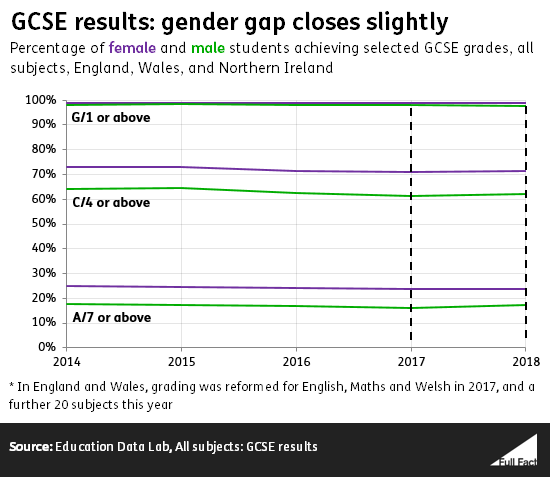 A tale of two regions

Performance across the different regions in the UK is where we see some of the biggest fluctuations this year. Overall, Northern Ireland continues to significantly outperform England and Wales. 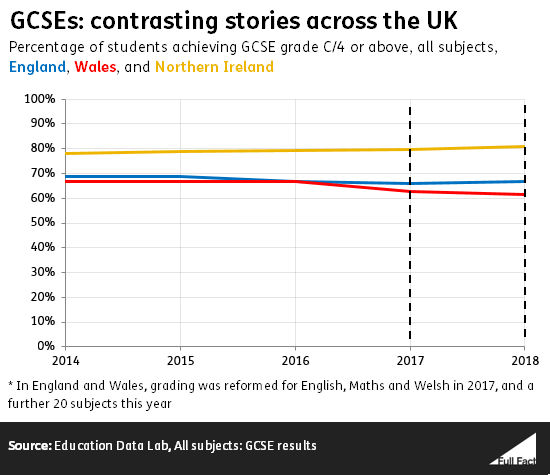 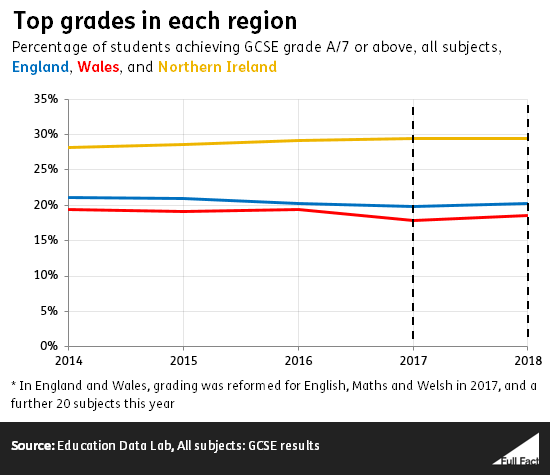