Have university applicant numbers fallen in 2017?

University applications fall by 25,000 as effects of Brexit and funding changes hit.

Applicant numbers have fallen by this much, compared to last year’s UCAS June deadline. There are probably a few things driving this, but UCAS says a major factor is a fall in the number of 18 year olds in the UK population. The 18 year old application rate is still at a record high.

There has been a steep decline in the number of student nurses following bursary cuts.

The number of applicants to nursing courses in the UK is down by 19% this year compared to 2016. Students starting on nursing, midwifery and most allied health courses from August will no longer be able to access the NHS bursary scheme in England.

University applications have fallen by 4%.

The number of applicants through UCAS to UK higher education institutions has gone down by 4% compared to last year.

The total number of people applying to higher education in the UK this year (as of the final June 2017 deadline) is down 4% compared to last year. That’s a decrease of around 25,000 applicants (there’s a separate set of data for applications, which we’re not going into here).

That’s not the case for all groups of students. The decrease has been driven by falls from England, Wales and the EU. Within England the number of older applicants has also fallen but the number and application rate of 18 year old applicants—who make up half of applicants— has continued to increase (although the rate has fallen slightly in Wales and Northern Ireland).

There are probably a few things going on here, but there’s a likely major factor not being talked about. Although it said the causes were probably complex and multiple, UCAS told us that the largest cause that stood out in the raw data was a fall in the numbers of 18 year olds in the UK population. 18 year olds are still applying at record rates, but there are fewer of them in the population this year compared to last year. And this makes a difference to the total number of applicants because about half of applicants are 18.

The largest group of applicants to UK higher education courses are those aged 18 (around 50% of all applicants in 2017). The number of applicants aged 18 continued to increase in 2017.

At the same time, the number of 18 years olds in the UK population has been decreasing, and is thought to have continued to fall this year (we don’t have official estimates until next year).

In 2017 the application rate for this age group in England was 37.9%, up 0.5% since last year. UCAS says this is a record high. It fell slightly in Northern Ireland and Wales.

Applicants over the age of 25 saw the biggest fall in applicant numbers, by around 14% between 2016 and 2017 (not taking account of population changes).

Looking at the decrease in the numbers of older students, Professor Les Ebdon the director of Fair Access to Higher Education said “the reasons behind the fall are complex and multiple”. 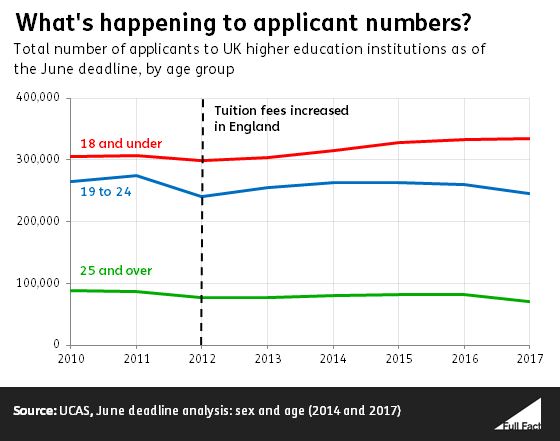 The decrease varies depending where the applicants are from

Although the number of people applying to higher education across the UK has decreased, the picture varies depending on where the applicant lives (when they first apply).

In England and Wales the number of applicants dropped by 5%. In Northern Ireland it fell by 4% and Scotland saw the lowest decrease with applicant numbers decreasing by 1%.

The number of applicants from the rest of the EU also decreased by around 5%.

The only group that saw an increase in those applying to universities was applicants from outside of the EU. This group increased by 2%.

Trends in the numbers of nursing students have received particular attention recently, after changes to their funding. Students starting on nursing and midwifery and most studying on allied health courses in England were previously able to access an NHS bursary. Anyone starting on one of these courses from August 2017 will no longer be able to get these bursaries and will instead have to apply for a student loan.

The number of applicants to nursing courses in the UK decreased by 19% this year compared to last. The biggest decreases were in students applying from England and the rest of the EU (down 23% and 24% respectively). Applicants from outside of the EU were again the only group to see an increase in numbers (38% compared to last year). 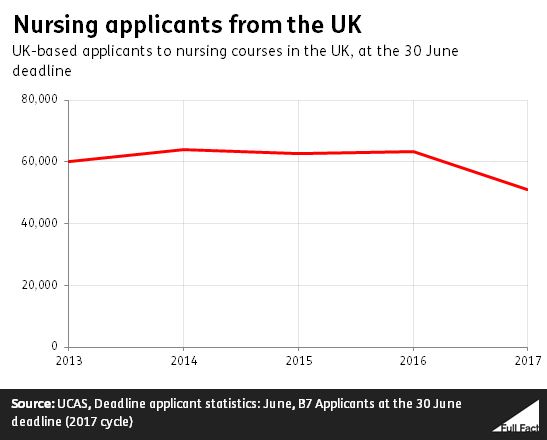 We’ve written more about that here.