Higher education in this country is blindingly white.

In the UK in 2016/17, 74% of UK students in their first year of an undergraduate degree were white. Among 18 year-olds in England, white pupils are the least likely of any ethnic group to take up a place in UK higher education.

Higher education in this country is blindingly middle class.

Across several different measures, the more disadvantaged your background, the less likely you are to go into higher education. The gap has been narrowing over time, but is bigger at the most selective universities.

In the UK in 2016/17, 74% of UK-domiciled students in their first year of undergraduate study were white, but at the same time white pupils are the least likely of any ethnic group in England to enter higher education.

A number of measures of social background show that the more disadvantaged your background, the less likely you are to go into higher education. On most of these measures, the gap in access has been falling over time, but remains much higher at the most selective universities.

In the UK in 2016/17, 74% of UK-domiciled students in their first year of an undergraduate degree reported they were white, according to the Higher Education Statistics Agency (HESA). That compares to 78% in 2012/13. 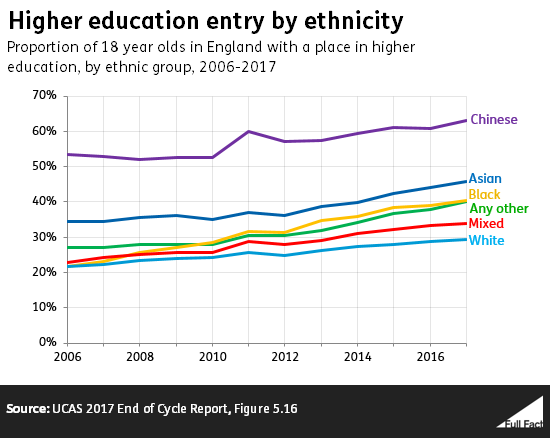 There are a number of different ways of looking at how many students are entering higher education based on their background and level of disadvantage.

One way to measure this is based on where a pupil lives, and assessing the levels of access to higher education for pupils from that area in the past. 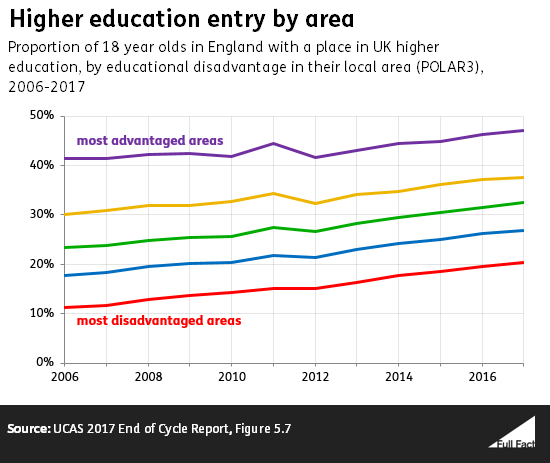 You can also measure disadvantage using a wider range of characteristics, including sex, ethnicity, where pupils live, and whether they were privately educated. It shows a similar trend. The most advantaged fifth of students were four times more likely to access higher education in 2017 than the most disadvantaged fifth. This gap has been narrowing over time, but it has stopped doing so in the last two years. 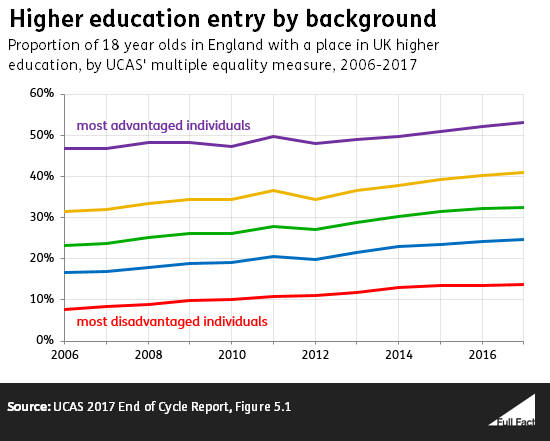 Based on these measures, the gap between the most and least advantaged students is wider at the most selective universities compared to other higher education institutions. We’ve written more about this here.

Pupils receiving free school meals at the age of 15 were half as likely to access higher education in 2017 as those who didn’t receive them. The gap had been falling over time, although it has stopped in the last two years. 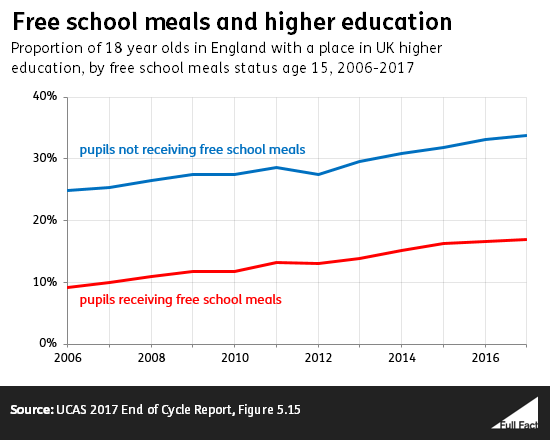