How many apprenticeships are successfully completed?

There's no evidence of a big drop-off rate of apprenticeships.

While the number of apprenticeships achieved each year has remained consistent, looking at achievements as a proportion of those finishing or due to finish shows, just under a third were unsuccessful - a proportion which has been increasing.

"There is no point in having starts if they are not going to be completed, but there is no evidence that there is a big drop?off rate of apprenticeships. If there was evidence of that, there would be a concern about looking at completions as well as starts."

Just under a third (31%) of apprenticeships finishing or due to finish in England in 2013/14 weren't successfully completed—a proportion that has increased over the last few years, from 26% in 2011/12.

That counts the rate of people failing to meet all the requirements for their apprenticeship in the year they ended or were due to end it.

Looking just at the number of apprenticeships completed each year, that's been about the same over the last few years.

The business secretary's comments came in response to a question about the number of completions, so it's possible he meant there's no evidence completions have been falling. But the proportion of people being unsuccessful in completing their apprenticeship seems a better indication of the "drop-off rate".

We put this point to the Department for Business, Innovation & Skills, which only commented that overall trends would be visible from January 2016, when the success rates for 2014/15 will be published.

About a third of apprenticeships are not successfully completed

69% of learners successfully completed the requirements of their apprenticeship (their "apprenticeship framework"), out of those finishing in 2013/14. 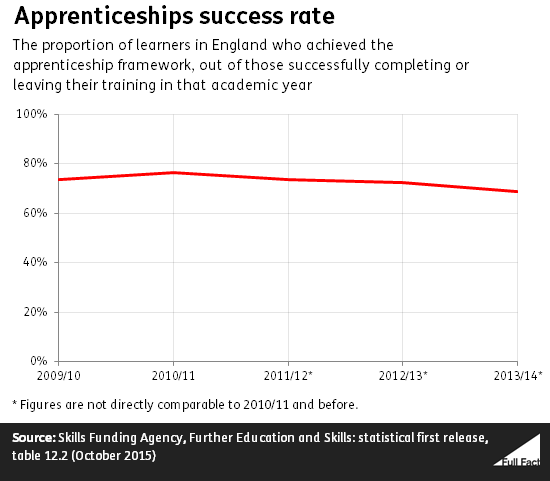 So the remainder are those who failed to complete the framework (i.e. dropped out or failed to achieve all requirements) and who have left training.

There are a few circumstances where people won't have been counted in these statistics, such as where they dropped out before their funding kicked in, transferred to another programme, or took a planned temporary break from learning.

Staying around the 250,000-260,000 mark between 2011/12 and 2013/14, the number of apprenticeship completions—or "achievements" as the statisticians call them—hasn't changed much. The statistical release comments that completions "have remained strong". 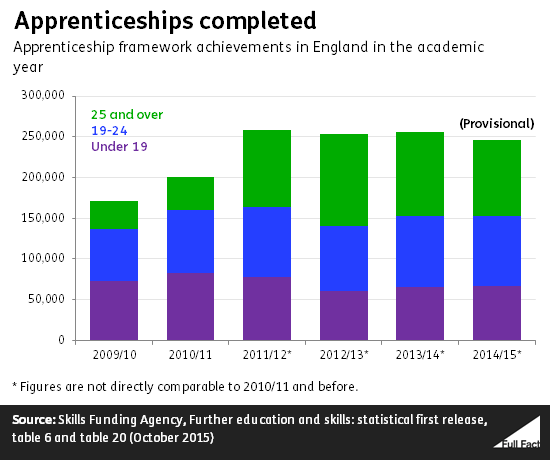