"Demos the think tank seems to be suggesting that [...] the attainment gap between poorer pupils at schools and wealthier ones is actually getting bigger",

"It's actually not what the official statistics showed [...] before Christmas, the attainment gap [...] was closing for the first time in a very long period of time and the reason why that appears to be the case is the effect of policies like the pupil premium.."

Listeners of the Today programme this morning might have been left a little confused about what has happened to the attainment gap. The answer is that it depends on the measure you choose to look at.

Looking at the GCSE attainment gap Demos is referring to, it was falling from 2009/10 to 2011/12, but appears to have increased slightly since then.

For primary pupils at their end of school assessment—the figure to which Mr Clegg refers—the attainment gap for reading, writing and maths was stagnant from 2012 to 2013 but fell slightly in the last year.

But it's difficult to say if the gap is narrowing by these measures as we don't have much comparable data over time. It's also too early to evaluate what impact the Pupil Premium has had on these trends. Initial evidence suggests it is at least leading to continued or extended support for disadvantaged pupils.

Demos' research is looking at the proportion of pupils gaining 5 or more A* to C grades including English and mathematics at GCSE level comparing those eligible for Free School Meals (by which most pupils become eligible for the Pupil Premium) to all other pupils. By this measure, the attainment gap had been decreasing from 2009/10 to 2011/12 and then increased slightly (by 0.4 percentage points) to 26.7 percentage points in 2012/13.

We can't compare directly to the latest figures because the way in which qualifications are counted has changed (including a cap on GCSE-equivalent qualifications only being able to count as one GCSE). Roughly, if these changes hadn't happened, the Department for Education estimates the attainment gap would have been 27.2 percentage points. By the newer measure, it stands at 27 percentage points. 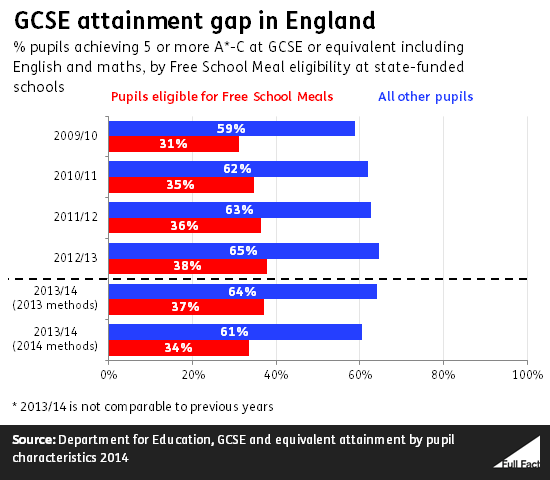 So the newest figures suggest the gap is widening but we won't have a good indication of this until next year's figures come out.

Primary attainment gap has decreased in the last year

The Lib Dem press office told us Nick Clegg was referring to attainment at the end of primary school—at Key Stage Two, but they haven't yet confirmed what was meant exactly by "a very long period of time". Looking at the proportion of FSM-eligible pupils achieving the expected level of Level 4 or above in reading, writing and maths and the proportion of all other pupils doing so, the gap stayed at 19 percentage points in 2012 and 2013, decreasing to 18 percentage points in 2014. 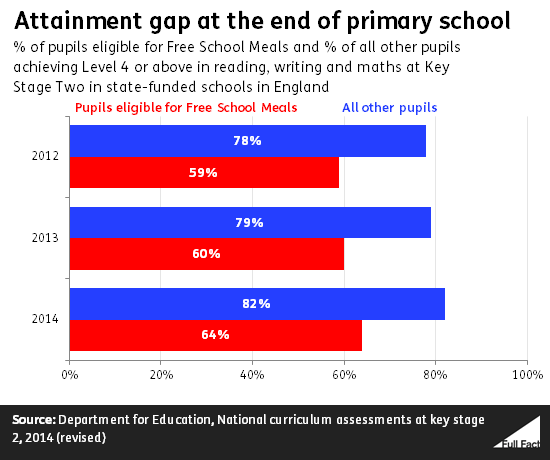 We can't compare back any further than 2012 because of changes to the writing assessment.

The Pupil Premium fund was introduced in April 2011 to support the education of disadvantaged children via money separate to the school budget.

Ofsted's analysis of 151 inspection reports found the Pupil Premium is making a difference in many schools, with outcomes for eligible pupils increasing. But it said it's too early to measure conclusively the impact that it's having on the attainment of disadvantaged pupils nationally.

Ofsted use 2012 data to judge any improvement in performance: it says it's very unlikely the funding would have influenced the attainment of the 2011 GCSE year cohort. It said it was unsurprising the attainment gap had barely changed between 2012 and 2013, given how recently Pupil Premium funding had been introduced.

One of the reasons the report gave for a lack of improvement in some schools was weak leadership and governance, meaning that pupils' needs were not being properly identified. It also said that it would take time before the full impact of the policy would be seen in national data.