The Prime Minister, Theresa May, has unveiled plans to allow new grammar schools in England. This hasn’t happened since 1998, when the Labour government passed a law to stop schools from selecting by ability, with the exception of existing grammars.

Readers have asked us to look also at the picture when grammar schools were common, rather than confined to pockets of England as they are now.

A disclaimer: Ms May has said that “people get lost in the argument about whether the grammar schools of the 1950s and 60s improved social mobility or not”, arguing that her government’s proposed changes would be different in important ways. The past can’t tell us everything about the future.

Grammar schools were common in the 1960s

The number of grammar schools peaked in 1964, with almost 1,300 across England and Wales. They educated 726,000 pupils that year, around a quarter of the total.

From 1965 onwards there was a decline in the number of grammar schools, as local authorities moved to comprehensive education under pressure from parents and the then Department of Education.

Today there are 163 grammars in England. 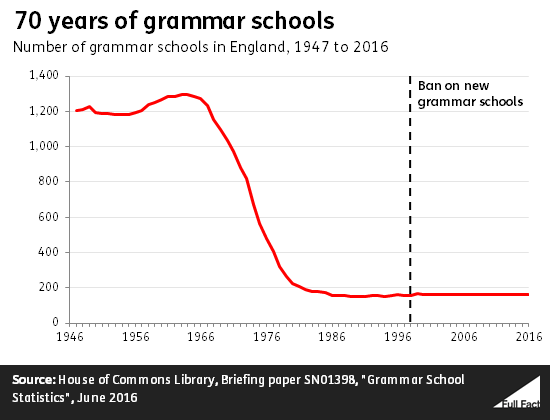 The first issue in considering whether grammar schools helped bright children from poor backgrounds to succeed is to see whether they got into them in the first place. While plenty did, the criticism that today’s grammar schools are “stuffed full of middle-class kids” seems to have been applicable to the 1950s and 1960s as well.

The 1954 Gurney-Dixon Report found that children whose fathers worked in ‘unskilled’ or ‘semi-skilled’ jobs were less likely to attend grammars. Children in these categories made up just over 20% of grammar school pupils, but 30% of pupils generally.

An academic study from around the same time commented that “the lower working class are still markedly under-represented in the Grammar Schools”. At the end of the decade, experts were writing that grammar schools were “largely middle class”.

A major study published in 1980 found that class differences in selective schools were not significantly different in 1964 compared with 40 years earlier.

Similarly, modern research from the University of Stirling looking back at the period between 1944 and 1964 concluded that “there was no improvement in social mobility”, in terms of pupils getting into grammar schools, compared to before the Second World War.

That’s not to say that the existing system is perfect, or even any better. Ms May has contrasted selection by ability with “selection by house price”, as parents able to afford it choose to move into the catchment area of high-performing comprehensive schools. “The vast majority of England’s most socially selective state secondary schools are non-grammar schools”, according to research carried out for the Sutton Trust in 2008.

Poor children that did get into grammar schools did well, but the rest did worse

The 1963 Robbins report included a survey on university participation among 21-year-olds in 1961/2. It showed that around 4% of people whose fathers worked in ‘manual’ occupations went into higher education. That compares to about 19% of ‘non-manual’ families.

While this is a small proportion, it “still represented a substantial number of students overall”, whose success may have given the impression that grammar schools were having a more widespread impact on social mobility.

Grammar schools in that era do seem to have done well by those who got into them, whether poor or not. But as in the modern era, there’s a knock-on effect.

The Institute for Fiscal Studies cites two academic studies on children born in the 1950s as evidence that “attending a grammar school is good for the attainment and later earnings of those who get in. But there is equally good evidence that those in selective areas who don’t pass the eleven plus do worse than they would have done in a comprehensive system”.

A third paper looking at pupils born between 1961 and 1983 concluded bluntly that “selective schooling systems increase inequality”. People who grew up in areas with a selective education system had bigger differences in income than those from areas with comprehensive school systems, although it could be argued that the period studied was after the purely selective era and so doesn’t wholly compare like with like.